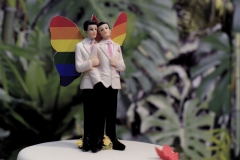 As part of its annual Values and Beliefs poll, Gallup asked, "Do you think marriages between same-sex couples should or should not be recognized by the law as valid, with the same rights as traditional marriages?"

"Since Gallup's initial measure on support for gay marriage in 1996, when 27% backed it, the percentage of U.S. adults saying it should be legally recognized has climbed by 40 percentage points," said the polling firm.

"Gallup first recorded majority-level support in May 2011, and support has exceeded 60% each year since 2016," the analysis stated.

Broken down politically, the numbers show that 83% of Democrats and 71% of Independents think gay marriage "should be recognized by the law as valid."

"U.S. Democrats (83%) have consistently been one of the most likely groups to favor same-sex marriage, and their support has grown the most (by 50 points) among political party groups since 1996," said Gallup. "Support has also grown considerably among independents -- now at 71%, up 39 points since Gallup's initial measure."

"Republicans have consistently been the least likely to favor same-sex marriage, though they have warmed to the idea over the course of Gallup's trend, growing in support by 33 points," reported the survey firm.