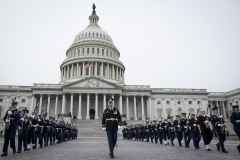 (CNS News) -- Gallup's latest governance poll reveals that Americans believe the federal government has too much power (54%) and that it tries to do too many things (52%). Also, at least 50% of Americans prefer lower taxes and fewer government services.

Only 19% of Americans want higher taxes and more government services.

"More Americans typically prefer a limited government role to an active one, think there is too much rather than too little regulation of business and believe the government is too powerful," said Gallup.

In the survey, done every year, Gallup asked, "Do you think the federal government today -- [has too much power, has about the right amount of power, or has too little power]?"

Fifty-four percent said "too much" power; 36% said "about the right amount"; and 9% said "too little" power.

"At least half of Americans since 2005 have said that the government has too much power, peaking at 60% in 2013 and 2015," reported Gallup. "From 2002 through 2004, in the first few years after 9/11, more Americans believed the federal government had about the right amount of power than believed it had too much."

"Relatively few Americans have ever said the government has too little power," reported the survey firm.

In another question, Gallup asked, "Some people think the government is trying to do too many things that should be left to individuals and businesses. Others think that government should do more to solve our country's problems. Which comes closer to your own view?"

"All party groups are less likely now than a year ago to favor a more active government role, but independents' opinions have changed the most," according to Gallup.  "In 2020, 56% of independents wanted the government to do more to solve problems, compared with 38% now."

"Independents are even less inclined to want a more active government role today than they were in 2019 before the pandemic began, when 45% held that view," reported Gallup. "The same is true of Republicans, whose opinions did not show meaningful change last year."

In relation to those responses, Gallup reported, "Currently, 77% of Republicans prefer fewer services and lower taxes, while 15% want no change and 7% prefer higher taxes and more services. Half of independents prefer lower taxes and fewer services, while 33% want to keep taxes and services where they are now and 16% want increases in both."

"Democrats are mostly split between wanting more services and more taxes (37%) and keeping taxes and services where they are now (40%)," said Gallup.  "Nineteen percent of Democrats prefer lower taxes and fewer services."

Only 25% of Americans said the government regulates business and industry "too little."