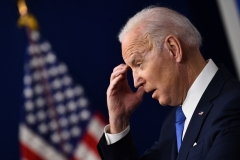 (CNS News) -- A new survey shows that only 40% of American adults approve of President Joe Biden's job performance. In addition, the poll found that political party polarization is the highest on record under Biden, in his first year, even more polarizing than President Donald Trump's first year.

In the survey, Gallup asked, "Do you approve or disapprove of the way Joe Biden is handling his job as president?"

In response, 40% said approve and 56% said disapprove. Four percent had no opinion.

"After a messy U.S. withdrawal from Afghanistan in late August, marred by a terrorist attack at the Kabul airport that killed 13 U.S. troops, [Biden's] approval fell further and has yet to show signs of improvement," said Gallup.

"In the latest survey, 40% of Americans approve and 56% disapprove of the job he is doing, as the U.S. is plagued by the highest inflation in four decades and another surge of COVID-19 cases, this time fueled by the omicron variant of the coronavirus," reported Gallup.

By political party, Biden has seen the greatest decline among independents. Only "33% approve of the president now compared with ratings of 50% or higher during the first six months of his presidency," said the survey firm.

Biden has set a record for political party polarization, the difference between Democrats who support him and Republicans who oppose the president. This gap is 83 percentage points.

In Trump's first year the gap was 75 percentage points.

"Biden's first year in office has come to an end as the anniversary of his inauguration approaches, and he begins his second year on January 20 in a much weaker political position than he began," said Gallup. Unlike Trump, Biden enjoyed an extended honeymoon as president largely because independents evaluated his early performance positively. Once the COVID-19 situation began to take a turn for the worse, independents began to lose faith in Biden, and the Afghanistan situation further eroded their support for him."

"With the midterm elections looming later this year and Biden's job approval stuck in the low 40s, the Democratic Party is facing significant losses of congressional seats," reported Gallup. "If that happens, Biden will have to govern with Republican majorities in his third and fourth years in office, and his ability to pass his agenda will be further hampered."