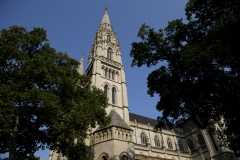 (CNS News) -- A new survey shows that for the first time in more than 80 years -- when Gallup first started asking about church membership in 1937 -- less than 50% of Americans said they formally belonged to a church, mosque, or synagogue.

In 1937, some 73% of American adults said they were officially members of a church. Today that number is 47%.

Church membership has drastically declined since the year 2000, when membership was at 70%.

"The decline in church membership is primarily a function of the increasing number of Americans who express no religious preference," said Gallup.  "Over the past two decades, the percentage of Americans who do not identify with any religion has grown from 8% in 1998-2000 to 13% in 2008-2010 and 21% over the past three years."

In addition, said the survey firm, "Church membership is strongly correlated with age, as 66% of traditionalists -- U.S. adults born before 1946 -- belong to a church, compared with 58% of baby boomers, 50% of those in Generation X and 36% of millennials."

"Currently, 31% of millennials have no religious affiliation, which is up from 22% a decade ago," said Gallup.  "Similarly, 33% of the portion of Generation Z that has reached adulthood have no religious preference."

"The U.S. remains a religious nation, with more than seven in 10 affiliating with some type of organized religion," concluded Gallup. "However, far fewer, now less than half, have a formal membership with a specific house of worship."

"While it is possible that part of the decline seen in 2020 was temporary and related to the coronavirus pandemic, continued decline in future decades seems inevitable, given the much lower levels of religiosity and church membership among younger versus older generations of adults," said the survey firm.