Gallup: Only 11% Have 'Great Deal' of Confidence in TV News, Only 16% in Newspapers

(CNS News) -- A new survey shows that only 11% of American adults have a "great deal" or "quite a lot" of confidence in TV news, and only 16% have such confidence in newspapers. These are "all-time low points," according to Gallup.

In the June poll of U.S. adults, Gallup asked, "Please tell me how much confidence you, yourself, have in each one -- a great deal, quite a lot, some or very little?"

"Television news and newspapers rank nearly at the bottom" of institutions measured by the survey," said Gallup, "with only Congress garnering less confidence from the public than TV news. While these two news institutions have never earned high confidence ratings, they have fallen in the rankings in recent years." 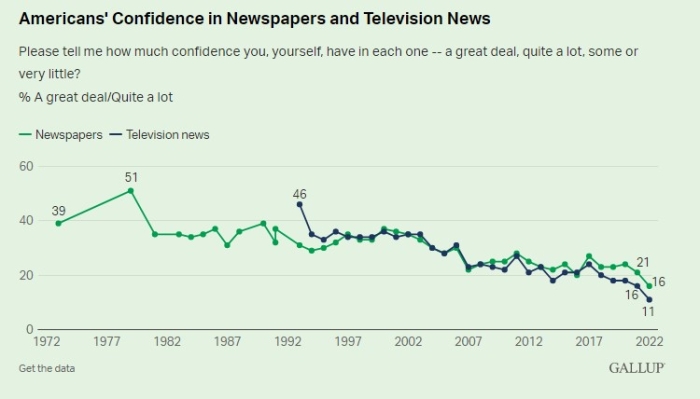 "The percentage of Americans who say they have 'very little' or volunteer that they have no confidence [in newspapers] is currently the highest on record, at 46%," reported the survey firm.

"This is the fourth consecutive year that confidence in TV news is below 20%," said Gallup. "And for just the second time in the trend, a majority of Americans, 53%, now say they have very little or no confidence at all in TV news."

When it comes to the political divide, 35% of Democrats said they have "a great deal/quite a lot" of confidence in newspapers. However, only 12% of independents and 5% of Republicans said the same.

For TV News, 20% of Democrats said they have "a great deal/quite a lot" of confidence in the medium, but only 8% of both Republicans and independents said the same.

"Majorities of Republicans and independents have expressed little or no confidence in TV news since 2017 and 2018, respectively," said the survey firm.

"Multiple Gallup measures of Americans' views of the news media show a growing distrust," said the company.  "Last fall, Gallup found near-record-low trust in the media to report the news fully, accurately and fairly, and few Americans rated newspaper and television reporters as highly ethical in Gallup's annual honesty and ethics of professions poll in December."

"Although trust in the media in the U.S. has been scarce for many years, confidence ratings for newspapers and TV news have never been as low as they are now," concluded Gallup.  "Taken together, these data suggest that the media has a long way to go to win back the public's confidence."