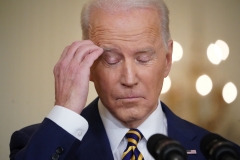 "Leadership was consistently rated as Trump's strongest quality throughout his term," said Gallup.

In the new survey, Gallup asked, "Thinking about the following characteristics and qualities, please say whether you think each applies or doesn't apply to Joe Biden."

However, only 43% said Biden "displays good judgment in a crisis," and only 38% said he "can manage the government effectively."

As for being a "strong and decisive leaders," on 37% of Americans view Biden that way.

Among independents, only 30% view Biden as a "strong and decisive leader, reported Gallup, and only 38% view him as "honest and trustworthy."

"Biden's 37% rating as a strong leader, a perceived weakness, is in sharp contrast to the three men who sat in the Oval Office before him," reported Gallup. "Donald Trump (54%), Barack Obama (56%) and George W. Bush (63%) averaged much higher readings over their presidencies."