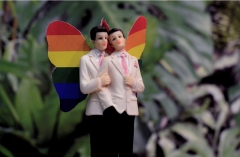 (CNS News) -- A Gallup survey shows that 67% of American adults support same-sex "marriage," which is a record high.  Just 24 years ago, 68% of Americans opposed gay marriage.

In the survey, Gallup asked, "Do you think marriages between same-sex couples should or should not be recognized by the law as valid, with the same rights as traditional marriages?"

In response, 67% said such marriages should be valid. Only 31% said they should not be valid.

In Gallup's data, it shows that back in 1996, only 27% of Americans said homosexual marriage should be valid, and 68% said it should not be valid.

Support for these "marriages" has grown 40 percentage points in 24 years.

On the political side, today, 83% of Democrats and 71% of Independents support gay marriage, according to Gallup, and 49% of Republicans do.

In 1996, only 33% of Democrats, 32% of Independents, and 16% of Republicans thought same-sex marriage should be recognized by law as valid.

"Americans' support for recognizing same-sex marriages as legally valid more than doubled between the late 1990s and the mid-2010s, and has since climbed even higher," said Gallup. "The trend parallels the evolution of societal attitudes on legalizing marijuana over roughly the same time."

"At this time, given both shifts in public attitudes and the Obergefell decision, gay marriage is unlikely to reemerge as a major issue in U.S. electoral politics," said the survey firm. "No serious efforts by the Republican Party, who were once staunch opponents to legalizing gay marriage, have been made since the court's decision -- even in recent years, under a Republican president."

"Still, tracking Americans' evolution on the issue has been a fascinating shift to observe; their changing views on this matter are one of the most notable shifts in public opinion Gallup has measured in recent decades," reported the survey firm. "Support for recognizing gay marriages has grown since the court's decision brought the issue to a close."