(CNS News) -- A new survey shows that 71% of Americans in general support "gay marriage." The same survey also shows that the "final holdouts" opposing gay marriage are Americans who attend church every week.

In the May 2-22 survey, Gallup asked adults in all 50 states and the District of Columbia, "Do you think marriages between same-sex couples should or should not be recognized by the law as valid, with the same rights as traditional marriages?" 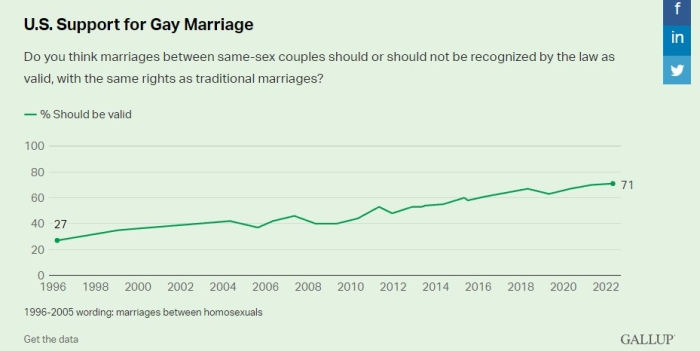 "When Gallup first polled about same-sex marriage in 1996, barely a quarter of the public (27%) supported legalizing such unions," reported the survey firm.  "It would take another 15 years, until 2011, for support to reach the majority level."

"Then in 2015, just one month before the U.S. Supreme Court's Obergefell v. Hodges decision, public support for legalizing gay marriage cracked the 60% level, and last year it reached the 70% mark for the first time," said Gallup.

However, for American adults who attend church weekly, the attitude is very different.

Gallup asked the same question -- "Do you think marriages between same-sex couples should or should not be recognized by the law as valid, with the same rights as traditional marriages?" -- and only 40% of weekly churchgoers said yes -- 58% said they opposed gay marriage.

"Americans who report that they attend church weekly remain the primary demographic holdout against gay marriage, with 40% in favor and 58% opposed," reported Gallup.

"Analyzing Gallup's trends since 2004, Americans who seldom or never attend church have always been mostly supportive of same-sex couples getting legally married," said the survey group. "Among those who attend nearly weekly or monthly, support did not rise to the majority level until 2014."

Faithful Catholics and Protestants (including evangelicals) and orthodox Jews, those who follow the Bible's moral prescriptions and church tradition, believe that marriage is between one man and one woman for life. 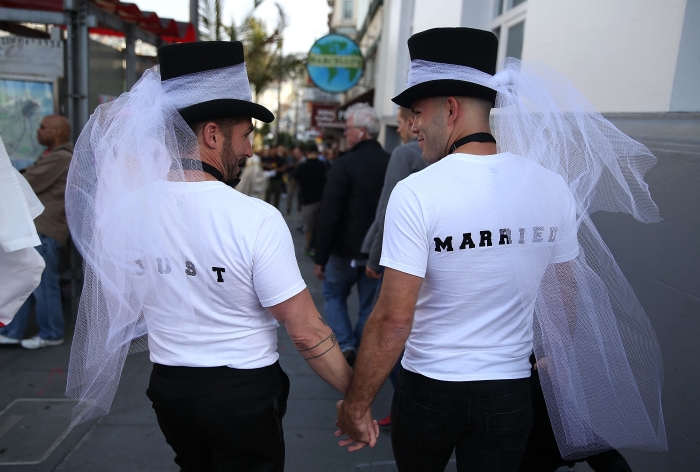 As Jesus Christ states in Matthew 19, "[A]t the beginning the Creator ‘made them male and female,’ and said, ‘For this reason a man will leave his father and mother and be united to his wife, and the two will become one flesh.' So they are no longer two, but one flesh. Therefore what God has joined together, let no one separate.”

Also, as St. Paul explains in Romans 1: "Therefore God gave them over in the sinful desires of their hearts to sexual impurity for the degrading of their bodies with one another. They exchanged the truth about God for a lie, and worshiped and served created things rather than the Creator—who is forever praised. Amen.

"Because of this, God gave them over to shameful lusts. Even their women exchanged natural sexual relations for unnatural ones. In the same way the men also abandoned natural relations with women and were inflamed with lust for one another. Men committed shameful acts with other men, and received in themselves the due penalty for their error." 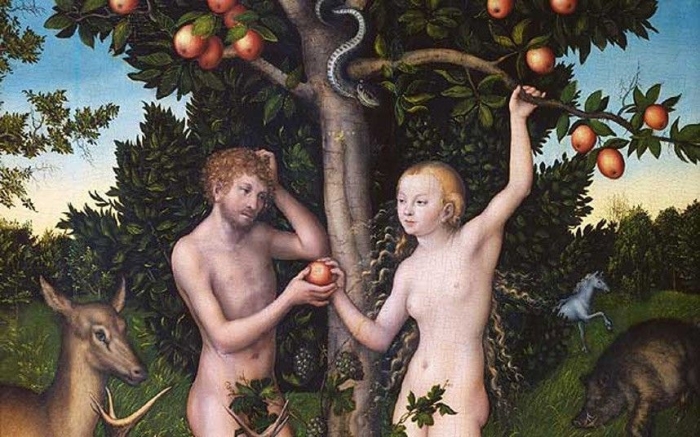 Further, Genesis 1 teaches, "So God created mankind in his own image, in the image of God he created them; male and female he created them.  God blessed them and said to them, 'Be fruitful and increase in number; fill the earth and subdue it. Rule over the fish in the sea and the birds in the sky and over every living creature that moves on the ground.'"

Rabbi Yaakov Menken, managing director of the Coalition for Jewish Values (CJV), told CNS News that, "Marriage is described in Genesis as directly connected to having children. So even without reference to clear prohibitions in Leviticus, it is obvious that a same-sex union is foreign to Judaism."  The CJV represents 1,500-plus traditional, orthodox rabbis nationwide.