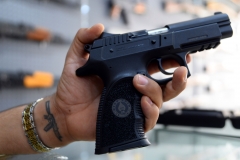 (CNS News) – There were an estimated 2 million firearms sales in July, which is an increase of 134.6% from July 2019, according to Small Arms Analytics & Forecasting (SAAF).

“The firearms market continues at its far accelerated pace,” said SAAF chief Economist Jurgen Brauer in a press release.  “Our estimates suggest that the market for the first seven months of 2020 now has nearly matched that of the entire year of 2019.”

When broken down, the data show that there were an estimated 1.2 million single handgun sales in July and about 0.6 million in single long-gun (rifle) sales.

“All other likely background check-related sales (0.16 million) increased year-over-year by 125.3%,” said the SAAF.  “This includes so-called ‘multiple’ sales where the exact split between handguns and long-guns cannot be determined from the data record.”

As explained in the press release, “SAAF’s firearms unit sales estimates are based on raw data taken from the FBI’s National Instant Criminal Background Check System (NICS), adjusted for checks unlikely to be related to end-user firearms sales. For example, the FBI’s raw numbers (for July, some 3,614,192) cannot be taken at face value as large numbers of background checks are unrelated to end-user sales.”