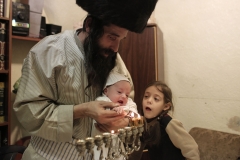 The new law, the Freedom of Reproductive Choice Act, codifies abortion into state law in New Jersey, allowing abortion under nearly all circumstances, even in late-term pregnancies.  "Moloch" is an idol, a false god mentioned in the Old Testament, to whom children were sacrificed, usually by fire.

"We're dismayed but not surprised that the Freedom of Reproductive Choice Act passed in New Jersey," said Jewish Pro-Life Foundation President Cecily Routman in the newsletter. "An army of abortion advocates and activists put lots of money, time, and effort into guaranteeing huge abortion-corporate industry profits from child killing as they continue to impoverish souls and families in the Garden State."

Illustration of the demonic, false god Moloch, to whom children were sacrificed. (Public domain)

Routman noted some of the key players in pushing the abortion bill, including the Planned Parenthood Legal Action Fund, and the "misguided sisters" at the National Council of Jewish Women (NCJW).

The NCJW in New Jersey said, "[we] applaud the passage of S49/A6260, Freedom of Reproductive Choice Act, which codifies in statute the full array of reproductive rights, including abortion, and thanks Governor Murphy for his steadfast support."

Gov.Murphy in a statement said, “With Roe v. Wade under attack, today’s historic legislation makes clear that New Jersey’s position in supporting the right to reproductive choice remains protected. Together, with expanding contraception coverage, these two pieces of legislation serve to meaningfully and tangibly increase access to reproductive health care, and ensure that New Jersey residents are now, and will remain, in control of their reproductive choices.”

Routman added, "While powerful special interests in politics, law, medicine, and media work to guarantee the legal slaughter of thousands of children, we look to our Creator to save us from evil forces that seek our demise."

Citing the Old Testament, she continued, "In this week's Torah portion, Beshalach, HaShem reveals His ultimate power by providing safe passage for the Jews facing certain death. All that was required was absolute faith in His Providence and decisive movement towards their destination.

"According to our Sages’ teaching, even babies in their mothers’ wombs joined in joyous song of gratitude and awe. This lesson reminds us that despite what appears to be undeniable obstacles, whole-hearted belief in HaShem's life-saving love and unwavering action guided by Torah principles produces miracles. Let's keep moving forward with our efforts to educate and heal, with complete confidence that HaShem's power will ultimately save us and our children from the forces of death."

According to the Jewish Pro-Life Foundation, approximately 338 U.S. Jewish children die from abortion every week. Since the 1973 Roe v. Wade decision, an estimated 845,846 Jewish children have been killed in the U.S.

In a brief filed with the Supreme Court, the Jewish Pro-Life Foundation and several other Jewish pro-life groups stated, "Abortion is antithetical to Torah principles. The act of abortion, and the industry that promotes and benefits financially from it, violates all Jewish ethics and morals."

"The history of Judaism includes many existential threats to Jewish life in the form of state sponsored mass murder," reads the brief.  "This makes us especially sensitive to the plight of the child in the womb, whose protection under the law was completely abrogated by Roe v. Wade, Doe v. Bolton and Planned Parenthood v. Casey."

The brief also notes that Margaret Sanger, the founder of the American Birth Control League, which became Planned Parenthood, were the "primary sponsors of eugenics during her lifetime. She associated herself with Adolph Hitler, praising him for his racial politics of eugenics."