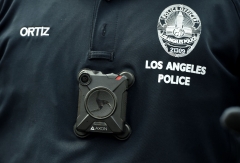 (CNS News) -- The Los Angeles Police Department Headquarters tweeted on Tuesday that during last week (May 31 - June 6), homicides went up 250% and the number of victims shot increased 56% when compared to the previous week.

"The past 24 hrs has seen 4 shootings, one of those resulting in a homicide," the tweet added. "Detectives are following leads to ID & arrest the suspects -- but we’re also asking for your help."

The LAPD then posted information about four shootings.

In one case, around 5:20 a.m. on June, L.A. police responded to a call about a shooting and found a Hispanic man, 40, dead "with multiple gunshot wounds."

In the Wilshire area on Sunday afternoon, a victim "was standing on the sidewalk speaking to someone in a vehicle when two suspects both described as male, Black (no further description) drove up along side of the vehicle and fired several rounds, striking the victim," said the LAPD.

The victim is now in the hospital and the police said the incident "is gang related."

In another incident on Sunday, a victim was shot by a suspect described as "male, Hispanic," about 25-30 years old. The victim is in the hospital and the incident is not gang related, said the LAPD.

Black Lives Matter, which has participated in many of the protests across the United States over the last two weeks, demands "a national defunding of the police."

On its website, BLM states, "#DefundThePolice. ...  We call for an end to the systemic racism that allows this culture of corruption to go unchecked and our lives to be taken.

"We call for a national defunding of police. We demand investment in our communities and the resources to ensure Black people not only survive, but thrive. If you’re with us, add your name to the petition right now and help us spread the word."