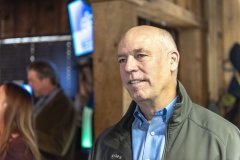 "Life is precious and ought to be protected," said Gov. Gianforte in an Apr. 26 tweet.  "Today, I proudly signed into law bills to protect the life of our most vulnerable, the unborn."

Life is precious and ought to be protected.

Today, I proudly signed into law bills to protect the life of our most vulnerable, the unborn. pic.twitter.com/RDYnE71gmM

"A person may not perform or attempt to perform an abortion of an unborn child capable of feeling pain unless it is necessary to prevent a serious health risk to the unborn child's mother," reads the new law.

In another bill (HB 140), now law, it requires "that a pregnant woman be afforded the opportunity to view an active ultrasound and ultrasound images and listen to the fetal heart tone of an unborn child before undergoing an abortion."

The third new law is the Montana Abortion-Inducing Drug Risk Protocol Act. This law essentially sets new regulations on the issuance of abortion-inducing drugs. For instance, it requires a medical practitioner to examine "a woman prior to dispensing an abortion-inducing drug in order to confirm the gestational age of the unborn child."

It also requires "that a woman considering a chemical abortion receives comprehensive information on abortion-inducing drugs, including the potential to reverse the effects of the drugs...."

“It’s a promising day, a day that will go down in our state's history as we defend life," said the governor on Monday. " Today we’re taking action to protect the most vulnerable among us, the unborn. We are celebrating life."