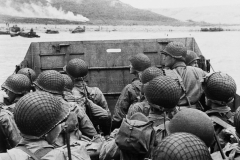 American assault troops in a landing craft huddle behind the shield 06 June 1944 approaching Utah Beach while Allied forces are storming the Normandy beaches on D-Day.  (AFP via Getty Images)

(CNS News) -- As the 77th anniversary of D-Day arrives this Sunday, June 6, former House Speaker Newt Gingrich (R) is calling on radio stations nationwide to broadcast the prayer offered by President Franklin D. Roosevelt (D) on that crucial day in 1944, which signified a decisive turning point in the war and the eventual end of Nazi Germany.

"Hearing an American President (and the most famous liberal Democrat in history) ask the American people to join in prayer and then openly praying to God is an emotional experience," wrote the former Speaker.  "It would be good for America if each year we remembered D Day with President Roosevelt’s prayer."

"Call your radio station and ask them to make this an annual tradition," he added.

On June 6, 1944, U.S. and Allied forces landed on the beaches of northern France. An estimated 10,000 American and Allied troops were wounded on that day and 4,414 were killed.

By the end of August 1944 U.S. forces had liberated northern France, and were on the march towards Berlin.  Hitler committed suicide in April 1945, 10 months after D-Day, and Germany surrendered on May 7, 1945.

Below is the text of FDR's D-Day prayer.

Almighty God: Our sons, pride of our Nation, this day have set upon a mighty endeavor, a struggle to preserve our Republic, our religion, and our civilization, and to set free a suffering humanity.

Lead them straight and true; give strength to their arms, stoutness to their hearts, steadfastness in their faith.

They will need Thy blessings. Their road will be long and hard. For the enemy is strong. He may hurl back our forces. Success may not come with rushing speed, but we shall return again and again; and we know that by Thy grace, and by the righteousness of our cause, our sons will triumph.

They will be sore tried, by night and by day, without rest-until the victory is won. The darkness will be rent by noise and flame. Men's souls will be shaken with the violences of war.

Some will never return. Embrace these, Father, and receive them, Thy heroic servants, into Thy kingdom.

And for us at home -- fathers, mothers, children, wives, sisters, and brothers of brave men overseas -- whose thoughts and prayers are ever with them--help us, Almighty God, to rededicate ourselves in renewed faith in Thee in this hour of great sacrifice.

Many people have urged that I call the Nation into a single day of special prayer. But because the road is long and the desire is great, I ask that our people devote themselves in a continuance of prayer. As we rise to each new day, and again when each day is spent, let words of prayer be on our lips, invoking Thy help to our efforts.

Give us strength, too -- strength in our daily tasks, to redouble the contributions we make in the physical and the material support of our armed forces.

And let our hearts be stout, to wait out the long travail, to bear sorrows that may come, to impart our courage unto our sons wheresoever they may be.

With Thy blessing, we shall prevail over the unholy forces of our enemy. Help us to conquer the apostles of greed and racial arrogancies. Lead us to the saving of our country, and with our sister Nations into a world unity that will spell a sure peace a peace invulnerable to the schemings of unworthy men. And a peace that will let all of men live in freedom, reaping the just rewards of their honest toil.

Thy will be done, Almighty God.