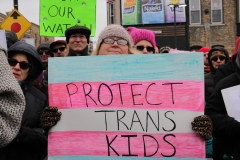 (CNS News) -- The Tennessee General Assembly passed legislation with an amendment last week that prohibits prescribing puberty blockers and cross-sex hormones to minors (under age 18) who may be experiencing gender dysphoria or gender incongruency.

Tennessee Gov. Bill Lee (R) has not yet signed the bill into law but he did sign off on earlier legislation that prohibits transgender "females" (biological males) from playing on girls' sports teams.

According to the Mayo Clinic, gender dysphoria "is the feeling of discomfort or distress that might occur in people whose gender identity differs from their sex assigned at birth or sex-related physical characteristics. Transgender and gender-nonconforming people might experience gender dysphoria at some point in their lives."

The legislation and the amendment passed on May 3.

The  Astrid Lindgren Children's Hospital in Stockholm, Sweden, recently announced a new policy, in which it no longer prescribes puberty blockers and cross-sex hormones to people under 16.

"These treatments are potentially fraught with extensive and irreversible adverse consequences such as cardiovascular disease, osteoporosis, infertility, increased cancer risk, and thrombosis," states the policy change.  "This makes it challenging to assess the risk/benefit for the individual patient, and even more challenging for the minors and their guardians to be in a position of an informed stance regarding these treatments."

In another tweet, the HRC described Tennessee legislation to protect children from the LGBT agenda as, "TN's Slate of Hate."