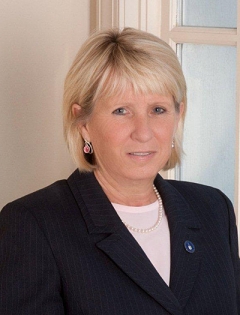 (CNS News) -- When asked whether she supports legislation that would allow a judge to reduce the penalty for assaulting a police officer from a felony to a misdemeanor in the Commonwealth of Virginia, House Delegate Kathy Byron (R- 22nd District) said she "adamantly opposes" the idea and added that it "sends the wrong message at the worst possible time."

"I am adamantly opposed to reducing the penalty for assaulting a police officer, judge, or firefighter," Del. Byron told CNS News in an email.

"This legislation sends the wrong message at the worst possible time," she said.

"As we witnessed in Virginia and across our nation over the last several months, our public safety officials are on the front lines of maintaining order and protecting life and property during riots," said Del. Byron. "During the course of these riots, we have watched as rioters have assaulted and thrown projectiles at our law enforcement professionals.  Reducing the penalties for these assaults serves to encourage and condone this behavior."

Under current Virginia law, the assault of a police officer (also firefighter, judge, prison guard) is a Class 6 felony with a mandatory minimum six-month jail sentence, and a potential fine of up to $2,500.

The new legislation, SB 5032, would not change the assault/felony statute but it would allow a judge or jury, using their discretion, to reduce the charge to a misdemeanor, and it would eliminate the mandatory prison sentence.

As the bill states, “Eliminates the mandatory minimum term of confinement for a simple assault or an assault and battery committed against a judge; magistrate; law-enforcement officer; correctional officer; person directly involved in the care, treatment, or supervision of inmates; firefighter; or volunteer firefighter or any emergency medical services personnel.

“The bill provides that any person charged with such offense where the degree of culpability is slight, a jury or the court may find the accused not guilty of such offense but guilty of a simple assault or assault and battery, punishable as a Class 1 misdemeanor.”

The legislation is now under review in the Virginia House.

Commenting on the legislation, Dana Schrad, executive director of the Virginia Association of Chiefs of Police, told the Associated Press, “We should be doing more to protect officers instead of sending a message that assaulting them is not a serious offense.”

The bill's sponsor, Sen. Scott Surovell (D- 36th District), contends that there are many instances of "assault" in which the contact is slight or very minimal and should not constitute a felony and a mandatory six-month jail sentence. As reported by WTKR news, Surovell has said, “The vast, vast, vast majorities of these [assaults] do not involve any kind of injuries. They involve slight contact. They shouldn’t be felonies.”

Democrats hold a 10-seat majority in the Virginia House of Delegates, 55-45.