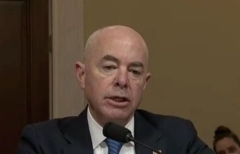 “Twenty years ago today, the Homeland Security Act of 2002 was signed into law – paving the way for the creation of our Department,” said Mayorkas.

Mayorkas recalled the “bipartisan spirit,” in which the Department was established by “Members of Congress, President W. Bush, and our first leader, Governor Tom Ridge.”

“Two decades later,” he continued, “we see more than ever the wisdom of, and need for, our Cabinet-level Department charged with the responsibility to secure the American people, our homeland, and our values.”

Mayorkas concluded his statement by expressing gratitude for “all those who built DHS, our partners who keep our communities and country safe, and the nearly 250,000 DHS employees who carry out our mission every day.”

According to an article published in 2003 in Law and Order by authors Joe and Diane Devanney, “the primary intent of the HSA is to reorganize 170,000 Federal employees from 22 agencies to facilitate efficient coordination of counter-terrorism activities.”

The HSA was passed within a year of the Uniting and Strengthening America by Providing Appropriate Tools Required to Intercept and Obstruct Terrorism (USA PATRIOT ACT) Act of 2001, otherwise known as the “Patriot Act.”

The Patriot Act’s intent was “to provide Federal law enforcement agencies with better tools to counter terrorism,” according to Devanney. “Key provisions expand surveillance authority and activities, including surveillance of the internet; tighten money laundering; and increase information-sharing among agencies,” Devanney explains.

In the month after 9/11, the Patriot Act passed the House of Representatives on October 24, 2001 by a vote of 357 to 66. The bill passed the Senate on the following day. by a vote of 98-1 with one Senator not voting. The sole opposition vote was cast by Senator Russ Feingold (D-Wisc.).