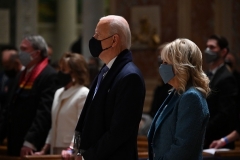 The Bidens at the Cathedral of St. Matthew the Apostle in Washington, D.C., on Wednesday morning. (Photo by Jim Watson/AFP via Getty Images)

(CNSNews.com) – Asked during her first White House briefing on Wednesday evening about President Joe Biden’s plans regarding federal funding for abortion at home and abroad, White House press secretary Jen Psaki had no immediate news to share, but said she wanted to remind the press corps that the president “is a devout Catholic, and somebody who attends church regularly.”

Psaki indicated, however, that an announcement would be coming shortly relating to the Mexico City Policy, which withholds U.S. foreign health assistance funding from non-governmental organizations (NGOs) that promote or perform abortions.

A reporter with the Catholic news network EWTN told Psaki that “two big concerns for pro-life Americans” were the Mexico City Policy and the Hyde Amendment, and asked, “What is President Biden planning on doing on those two items right now?”

“Well, I think we’ll have more to say on the Mexico City Policy in the coming days,” she replied. “But I will just take the opportunity to remind all of you that he is a devout Catholic, and somebody who attends church regularly. He started his day attending church with his family this morning. But I don’t have anything more for you on that.”

Biden and First Lady Jill Biden attended a service at the Cathedral of St. Matthew the Apostle in Washington D.C. hours before the inauguration, along with then Vice President-elect Kamala Harris and her husband, Douglas Emhoff.

While campaigning for the presidency, Biden pledged to rescind the Mexico City Policy.

It was then reinstated in 2017 by President Trump, and tightened to apply to all U.S. foreign health assistance, not just funding for family planning programs as had previously been the case.

While the Mexico City Policy deals with abortions abroad, the Hyde Amendment relates to the situation within the U.S., prohibiting federal funding for abortion except in cases of rape, incest, or when the mother’s life is endangered.

During the Democratic presidential primary Biden’s campaign confirmed his support for the 1976 provision, but then in June 2019 he swiftly changed his stance after it was challenged by at least six of his rivals in the primary, including then-Senator Harris.

Biden reaffirmed his new position during a CNN debate in March last year, when confronted by Sen. Bernie Sanders of Vermont. Biden said he had changed his stance “a while ago,” because “if we’re going to have public funding for all healthcare along the line, there is no way you could allow for there to be a requirement that you have Hyde Amendment – a woman who doesn’t have the money could not have coverage under healthcare.”

During the same debate, Biden said that as president he would send immediately to Congress legislation to codify Roe v. Wade, the 1973 Supreme Court decision that legalized abortion.

The previous year, he also pledged to reverse the Trump administration’s prohibition on Title X family planning funds going to programs and facilities that support, perform or refer patients for abortions.

“Today we finally begin a new chapter for our country – one where we begin to take full control of our bodies, our rights, and our futures,” Planned Parenthood Action Fund president Alexis McGill Johnson said on Wednesday.

“If President Biden truly wants unity, respecting the free speech and conscience rights of Americans, including those of his Church, is essential, along with limiting taxpayer funding of abortion,” tweeted Students for Life of America president Kristan Hawkins. “That’s common ground and a good place to start a conversation.”

“From day one, Joe Biden and Kamala Harris will head the most extreme pro-abortion administration in U.S. history,” said Susan B. Anthony List (SBA List) president Marjorie Dannenfelser. “They will have no qualms about checking every item off the abortion lobby wish list.”

“Susan B. Anthony List vows to fight for unborn children and their mothers against Democrats’ deadly agenda. We will vigorously oppose and defeat efforts to expand the Supreme Court, codify Roe into law, and force taxpayers to pay for abortion on demand.”