Biden on Supporting Reparations: Depends on Details, Whether It Includes Native Americans 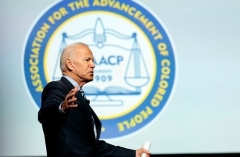 (CNSNews.com) – Presumptive Democratic presidential nominee Joe Biden on Wednesday declined to say whether or not he supports reparations for African Americans, telling a NAACP virtual town hall event it would depend on the details and whether Native Americans are included in a reparations program.

“I know you’ve said before that you want to see studies, that you weren’t necessarily ready to say you were for reparations but you’d be willing to at least look at studies,” Gordon said to the former vice president.  “There are a lot of people who’ve suggested that these studies have been going on for a mighty long time, and why not say now whether you would be for reparations or not?”

“I know what has to be done now and you know it too,” Biden began. “Let’s not wait.”

While studies continue into the issue and into whether direct cash payments should be made, he said, “in the meantime you know what has to be done.”

Biden then spoke for about a minute and a half about the need to change things relating to housing ownership, home equity, and education for black Americans – before Gordon pressed him again.

“We can find that on [joe]biden.com, but I’m not sure what your answer is to the reparations question.”

“If in fact there are ways in which to get direct payments for reparations, I want to see it,” Biden said. “But why are we waiting around for the study?”

Gordon said the two weren’t mutually exclusive, and Biden agreed, adding that he could not believe the African American community would not support the policies he’s proposing.

Gordon tried again: “If in fact a calculation comes to you that you are satisfied with, would you then say, ‘I’m for reparations’?

“The answer is it would depend on what it was, and will it include Native Americans as well.”

Biden got testily defensive on a couple of occasions during the event, when the Obama presidency was raised, and when asked about young blacks’ skepticism about his candidacy, given his role in the 1994 crime bill.

“Most black folk understood that electing an African American president did not change the landscape for most of us,” Gordon commented. He started to move to a question, but Biden took issue with his assertion, and jumped in.

“Oh absolutely. Absolutely. I’m not trying to minimize that,” said Gordon. “But I think that this is the discussion that has to be had. The hope that we had as African American people is different than I think what liberal whites had, and what others had, who suggested that – even some went so far as to say we were in a post-racial society. We knew better than that.”

“I never said that,” Biden interjected.

“No,” Gordon said with a smile. “I’m not suggesting that you said that sir.”

Later, the moderator raised what he said were questions emailed to him from young voters concerned about Biden’s role, as a senator, in writing the crime bill, and the perception that he would not be able to see beyond “traditional policing.”

Biden said that was “not accurate,” then went off on a two-minute tangent about the incorrect notion that young people would not vote, concern about voting access, polls showing support for anti-racism protestors, and the effects of the COVID-19 pandemic.

Gordon brought him back to the original question.

“You said that they [the young people he referenced earlier] were wrong in thinking that. But that is their feeling, so give them a sense of why–”

“No, there’s no evidence,” Biden interjected heatedly. “No, that’s not true. You – show me a poll that says that.”

Gordon explained that he was not talking about polls, but about the young people who had emailed in to him.

“Oh, okay. Alright, I got it,” said Biden. “It’s a legitimate concern, they should be skeptical.”