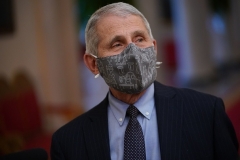 Dr. Anthony Fauci at the White House in January. (Photo by Mandel Ngan/AFP via Getty Images)

(CNSNews.com) – Two months after he said it was possible Americans may still need to wear masks in 2022, President Biden’s chief medical advisor Dr. Anthony Fauci said on Sunday that the risk of acquiring COVID-19 outdoors, especially for a vaccinated person, is “minuscule,” and indicated that updated guidance on mask-wearing outdoors would be coming soon.

Fauci told ABC News’ “This Week” that he did not want to get out ahead of the Centers for Disease Control and Prevention (CDC), “but I think it’s pretty common sense now that outdoor risk is really, really quite low, particularly, I mean, if you are a vaccinated person, wearing a – wearing a mask outdoors, I mean, obviously, the risk is minuscule.”

“The CDC is a science-based organization,” Fauci said. “They don’t want to make any guidelines unless they look at the data, and the data backs it up. But when you look around at the commonsense situation, obviously, the risk is really very low, particularly if you are vaccinated.”

Two months ago Fauci and CNN’s Dana Bash had a discussion on CNN’s “State of the Union” about the possibility of Americans still needing to wear masks by next year, without specific reference to indoor or outdoor environments.

“Do you think Americans will still be wearing masks, for example, in 2022?” asked Bash.

“You know, I think it is possible that that’s the case,” Fauci replied.

Asked why he thought that, Fauci said, “Because it depends on the level of dynamics of virus that’s in the community.”

“If you see the level coming down really, really very low – I want it to keep going down to a baseline that’s so low, that there’s virtually no threat,” he said, before acknowledging that the risk level would never be at zero.

“So, if you combine getting most of the people in the country vaccinated with getting the level of virus in the community very, very low, then I believe you’re going to be able to say, for the most part, we don’t necessarily have to wear masks.” 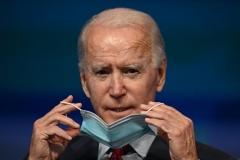 Before his inauguration, then-President-elect Biden challenged every American to wear a mask for the first 100 days of his presidency. (Photo by Jim Watson/AFP via Getty Images)

On February 21, the number of Americans to have received two doses of one of the authorized coronavirus vaccines stood at 17.9 million. As of Sunday, the number of fully vaccinated Americans had risen to 94.7 million.

The apparently pending CDC advice change comes as Biden approaches his 100th day in office. Shortly before his inauguration he urged Americans to wear masks universally for the first 100 days of his presidency, and in an executive order shortly thereafter he mandated the wearing of masks on federal property.

In line with that, the National Park Service started requiring employees and visitors at national parks to wear face masks outdoors when physical distancing was not possible – “including narrow or busy trails, overlooks and historic homes” – and indoors in all instances.

Asked on Thursday whether Biden was going to extend his call for all Americans to wear masks beyond 100 days, White House press secretary Jen Psaki said she had no update, but that the president was “working and in discussions with our health and medical experts about what we need to do to get the pandemic under control.”

She said the administration was leaving it to the CDC to determine and announce any guidance changes.

A review of peer-reviewed papers, published in The Journal of Infectious Diseases in February, found that below ten percent of reported COVID-19 infections take place outside, while infections were 19 times less likely to happen outdoors than indoors.

Citing those findings, CNN medical correspondent Dr. Sanjay Gupta said at the weekend, “the vast majority of viral transmission is not happening outside,” and added, “I’d say for the most part you don’t need to wear a mask outdoors.”

Still, even though the virus “doesn’t like to be outdoors” or “in the sunlight,” Gupta said, common sense should prevail if a large number of people are clustered together in a single area and are going to be there for long periods of time – and if viral transmission levels are high in the area in question.