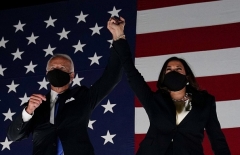 (CNSNews.com) – Democratic vice presidential nominee Kamala Harris on Sunday backed away from presidential running mate Joe Biden’s call for a national mandate for Americans to wear face masks as a protective measure against COVID-19 infection, describing mask-wearing instead as a “standard.”

Asked in a CNN interview whether mask-wearing would be made mandatory under a Biden-Harris administration, she replied, “The Biden-Harris position on this is that leaders must lead. And one of the ways leaders lead is they set standards.”

“And so what Joe has been very clear about in his personal behavior – much less in what he is admonishing and requesting of the American people – is that we all make the sacrifice to wear a mask in the interest of love of our neighbor, in the interest of defeating, or at least reducing the health risks or the number of deaths in America,” said Harris. “So it’s about a national standard.”

“There’s a difference between a standard and a mandate,” CNN’s Dana Bash noted. “Would it be a federal mandate under the Biden-Harris administration?”

She accused President Trump of turning the question of mask wearing into a partisan political issue.

Accepting his party’s nomination at the Democratic National Convention last month, Biden declared, “We’ll have a national mandate to wear a mask – not as a burden, but as a patriotic duty to protect one another.”

A week earlier, during a press appearance with Harris in Delaware, Biden said, “Let’s institute a mask mandate, nationwide, starting immediately,” adding that doing so would save an estimated 40,000 lives in three months.

Taking the podium moments later, Harris said “that’s what real leadership looks like. We just witnessed real leadership, which is, Joe Biden said that as a nation we should all be wearing a mask for the next three months, because it will save lives.”

Citing the COVID-19 death toll, Harris said, “So what real leadership looks like is Joe Biden – to speak up, sometimes telling us the stuff that we don’t necessarily want to hear, but we need to know.”

Reverting to her written notes, she continued, “And the need for this mandatory mask-wearing will also be about what Joe has articulated, and what a Biden-Harris administration will do, in terms of creating a pandemic testing board, to get tens of millions of testing kits where needed.”

Trump questioned Biden’s stance, telling reporters that day, “My administration has a different approach. We have urged Americans to wear masks, and I emphasized this is the patriotic thing to do.”

Trump said mask-wearing decisions were “up to the [states'] governors.”

“You have very, very different states facing very unique differences and circumstances,” he said. “We have entrusted the governors of each state elected by the people to develop and enforce their own mask policies and other policies, following guidance from the federal government and CDC.”

“We are working with each state to implement a plan based on the facts and science,” Trump added. “We will continue to urge Americans to wear masks when they cannot socially distance, but we do not need to bring the full weight of the federal government down on law-abiding Americans to accomplish this goal.”

Last week, when asked about a federal mask mandate, Biden himself backed away from his previous remarks, saying he would put as much pressure as he could on state and local authorities to comply.

“There’s a question whether or not a president, under the Constitution, could mandate everyone to wear a mask,” he said, describing himself as “a constitutionalist.”