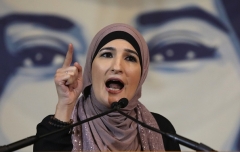 Some high-profile Sanders supporters in the Muslim community have not been enthusiastic about moving their support to Biden, as seen in a series of tweets later Monday by Palestinian American activist Linda Sarsour, a controversial former co-leader of the Women’s March.

“I choose Biden,” Sarsour said. “But I choose him as my opponent in the White House. I want him to defeat Trump so we can mobilize our movements to hold him accountable and push him to do and be better. We can’t do that with Trump.”

Sarsour said most of “our people” backed Sanders in the primary “because he earned our votes & we need Biden to continue to do the same.”

She recalled that Sanders had addressed “the plight of the Palestinian people,” and had “vehemently criticized the Netanyahu Government, opposed the moving of the embassy [to Jerusalem], called for an end to occupation, a conditioning of military aid, etc.”

“Biden has a lot of work to do to win the hearts of young Muslim Americans who were core to Bernie’s campaign,” Sarsour tweeted. “They are anti-war, pro-Palestinian, pro-Abolition of ICE & support defunding of police.”

‘One of my avocations is theology’

Addressing the Emgage Action event earlier in the day, Biden began on a theological note.

“And what people don’t realize – as one of my avocations is theology – don’t realize is we all come from the same root here, in terms of our fundamental basic beliefs.”

He thanked the PAC for endorsing him, noted it has launched a campaign aimed at boosting the Muslim vote, and made his case for why Muslims should support him over Trump in November.

“Muslim communities were the first to feel Donald Trump’s assault on black and brown communities in this country with his vile Muslim ban,” he said, vowing to undo the move “on day one,” should he become president.

As it currently stands, the travel proclamation referred to by Biden prohibits entry into the U.S. of certain categories of nationals of 13 countries, eight of which have Muslim majorities. (The other five are Burma, Eritrea, Tanzania, North Korea and Venezuela.)

The eight Muslim-majority countries – Iran, Kyrgyzstan, Libya, Nigeria, Somalia, Sudan, Syria and Yemen – account for a combined Muslim population of around 289 million people, or fewer than one-fifth of the world’s estimated 1.6 billion Muslims.

Forty-nine other Muslim-majority countries, including the six most populous ones (Indonesia, Pakistan, Bangladesh, Egypt and Turkey) are not included in the proclamation, though critics persist on calling it a “Muslim ban.”

Biden, who spoke for a little over ten minutes, accused Trump of “fanning the flames of hate,” through his words, deeds, policies and appointments, and charged that there has been “an unconscionable rise in Islamicphobia [sic]” under his administration.

“I won’t fail to speak out against the abuses of human rights including targeting for violence and prosecution Muslim minorities around the world,” he said, citing Uighurs in China and Rohingya in Burma.

Biden said he would work with partners “to meet the moral demands of the humanitarian crises in Syria, Yemen, and Gaza,” and would “continue to champion the rights of Palestinians and Israelis to have a state of their own, as I have for decades.”

Unlike Sanders, Biden has said he doesn’t support making U.S. aid to Israel conditional on Israeli policies, and that he opposes the anti-Israel boycott, divestment and sanction (BDS) movement.

Sarsour, an ardent BDS supporter, took part in Monday’s Emgage Action video event, where she spoke about the importance of holding a President Biden accountable after the election.

She also called for more action from Muslim Americans.

“If you want Medicare-for-all, if you want a just immigration policy, if you want to see an end to the military occupation of the Palestinian people, then I need you on the streets all the time,” Sarsour said. “I need you to be engaged all the time.”