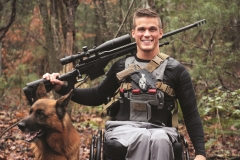 (CNSNews.com) – A 25-year-old running for a seat that would make him the youngest member of Congress ended his speech at the Republican National Convention on Wednesday night by hauling himself out of his wheelchair, standing to recite an adaptation of the pledge of allegiance.

The striking moment came at the end of an address in which Madison Cawthorn referred to kneeling before God, but standing for the flag.

He made a case for the ability of young people to “change the world,” threw out challenges to liberals and conservatives alike, and encouraged young Americans to be “radical” for liberty.

“We are committed to building a new town square. It welcomes all ideas and all people,” he said. “Here, we will have freedom of speech, not freedom from speech.”

“To liberals, I say let’s have a conversation. Be a true liberal, listen to other ideas, and let the best ones prevail. And to conservatives, I say let’s define what we support and win the argument in areas like health care and the environment.”

“In this new town square, you don’t have to apologize for your beliefs, or cower to a mob,” Cawthorn said. “You can kneel before God but stand for our flag.”

“The American idea my ancestors fought for during the Revolutionary War is just as exciting and revolutionary today as it was 250 years ago,” he continued, as two assistants walked onto the platform, one placing a walking frame in front of Cawthorn’s wheelchair.

“I say to Americans who love our country, young and old, be a radical for freedom. Be a radical for liberty,” he said, as the assistants steadied the frame, and he pulled himself up onto his feet.

“And be a radical for our Republic,” Cawthorn said. “For which I stand. One nation, under God. With liberty and justice for all.”

Earlier in the speech, Cawthorn noted how young some of the great men of American history were at the time they were making an impact, citing George Washington, James Madison and Abraham Lincoln.

“In times of peril, young people have stepped up and saved this country, abroad and at home. We held the line, scaled the cliffs, crossed oceans, liberated camps, and cracked codes.”

Cawthorn has been partially paralyzed since a crash in a motor vehicle being driven by a friend, who fell asleep at the wheel. He was 18.

He won the Republican primary in June for the House of Representatives seat in North Carolina’s 11th congressional district, vacated when Republican Rep. Mark Meadows resigned to become White House chief of staff.

In the November election, Cawthorn is up against Democrat Moe Davis, a retired U.S. Air Force colonel 37 years his senior.

A recent Democratic Congressional Campaign Committee internal poll put Cawthorn ahead of Davis by around five percentage points. President Trump carried the district in 2016, beating Hillary Clinton by 17 points. (Its boundaries have since been altered by redistricting.)

On August 1 Cawthorn turned 25, the minimum age requirement to serve in the House. If successful in November he will become the youngest member of Congress. That position is currently held by Rep. Alexandria Ocasio-Cortez (D-N.Y.), 30.