Trump Warns Violent Protestors in Minnesota: ‘When the Looting Starts, the Shooting Starts’ 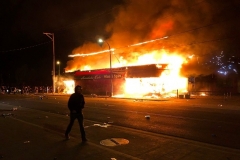 Flames rise from a liquor store near the Third Police Precinct in Minneapolis on Thursday night. (Photo by Kerem Yucel/AFP via Getty Images)

(CNSNews.com) –  As a police precinct in Minneapolis went up in flames overnight, President Trump tweeted that he has offered Minnesota Gov. Tim Walz military support, and added a warning: “Any difficulty and we will assume control but, when the looting starts, the shooting starts.”

The Minnesota National Guard announced it had “activated more than 500 soldiers to St. Paul, Minneapolis and surrounding communities,” following three days of demonstrations sparked by the killing of a Minneapolis man, George Floyd, in police custody.

“Our mission is to protect life, preserve property and the right to peacefully demonstrate,” the National Guard said. “A key objective is to ensure fire departments are able to respond to calls.”

Some protestors have resorted to looting and arson attacks targeting businesses and vehicles. Late on Thursday the Third Police Precinct in Minneapolis, evacuated by police, was set on fire by protestors who broke windows and chanted slogans.

KHOU-11, a CBS affiliate, showed footage of the precinct burning early into Friday morning. In St. Paul, fires could be seen raging near the new Allianz Field soccer stadium.

Shortly before 1 am. on Friday, Trump tweeted, “I can’t stand back & watch this happen to a great American City, Minneapolis. A total lack of leadership. Either the very weak Radical Left Mayor, Jacob Frey, get his act together and bring the City under control, or I will send in the National Guard & get the job done right …”

“… These THUGS are dishonoring the memory of George Floyd, and I won’t let that happen. Just spoke to Governor Tim Walz and told him that the Military is with him all the way. Any difficulty and we will assume control but, when the looting starts, the shooting starts. Thank you!”

A few minutes later Frey, the city’s mayor, tweeted: “We are working with @MinneapolisFire to deliver resources and respond for a beloved neighborhood in our city. We all need to work together to ensure the safety of our friends, family, and Minneapolis residents. And right now working together means clearing the area.”

During a subsequent press briefing, a reporter read out Trump’s tweets and asked Frey – who said he had not seen them earlier – for his reaction.

“Well, let me say this:  Weakness is refusing to take responsibility for your own actions,” Frey said in response to the president’s criticism directed at himself.

“Weakness is pointing your finger at somebody else during a time of crisis. Donald Trump knows nothing about the strength of Minneapolis. We are strong as hell.”

“Is this a difficult time period? Yes. But you better be damn sure that we’re going to get through this.”

Frey also told the briefing that he had given the order for the Third Police Precinct to be abandoned, after discussions with Minneapolis Police Chief Medaria Arradondo, because it had become clear that “there were imminent threats to both officers and public.”

“The symbolism of a building cannot outweigh the importance of life, of our officers, or the public,’ he said. “We could not risk serious injury to anyone.”

Frey said there was “a lot of pain and anger” in the city, but “what we have seen over the past several hours and the past couple of nights in terms of looting, is unacceptable. Our communities cannot and will not tolerate it.”