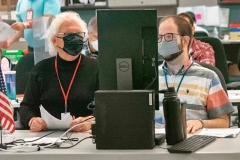 (CNSNews.com) – While you were sleeping, Democratic presidential nominee Joe Biden gained a slight edge in the ongoing Georgia vote-count.

Biden, at last check, had a 917-vote lead over Trump, but it's not over yet. Thousands of provisional and overseas ballots remain to be counted in Georgia.

The race was tightening elsewhere as well.

Despite two major news organizations calling Arizona for Biden – and defending their decisions to do so – his lead over President Trump continued to steadily erode, and as of 11 PM (EST) on Thursday it was down to 1.52 percentage points, with 90 percent of the expected vote counted.

When Fox News became the first media outlet to call Arizona and its 11 electoral votes for Biden – at 11:20 PM on Tuesday night – the former vice president was leading Trump by 7 percentage points.

By the time the Associated Press called the state for Biden – at 2:50 AM on Wednesday morning – his lead over Trump was around 139,000 votes (5 percent), according to the news agency.

Arizona news outlets were reporting that as of Thursday afternoon, there were still at least 430,000 votes to be tallied. Most are in Maricopa County, which includes Phoenix and accounts for around 62 percent of Arizona’s population.

“Arizonans turned out in historic numbers for this election, and we owe it to them to count their votes. The results have shifted greatly hour by hour, and from last night until today,” Arizona Gov. Doug Ducey, a Republican, tweeted on Wednesday.

“With hundreds of thousands of votes still outstanding, it’s important that we be patient before declaring any races up or down the ballot. Arizonans have cast their votes, and we need to make sure all their voices are heard fairly and accurately.”

On Wednesday night, Nate Silver, in a post on his FiveThirtyEight website, said that while he thought Biden would likely win Arizona, “I sure as heck don’t think the state should have been called by anyone, and I think the calls that were previously made should be retracted now.”

While other news organizations have not yet called Arizona for Biden, Fox News’ decision desk director Arnon Mishkin has defended the decision to go early with that assessment, saying that with Biden then leading Trump by seven percentage points, “the president is not going to be able to take over and win enough votes to eliminate that seven-point lead that the former vice president has.”

NBC News, top, has not called Arizona for Joe Biden, while Fox News, below, has. (Screen grabs: NBC, FNC).

The AP says it called the presidential race in Arizona “after an analysis of ballots cast statewide concluded Trump could not catch up in the ballots left to be counted.”

“The Associated Press continues to watch and analyze vote count results from Arizona as they come in,” AP executive editor Sally Buzbee said on Thursday. “We will follow the facts in all cases.”