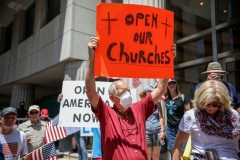 Demonstrators holding signs demanding their church to reopen, protest during a rally to re-open California and against Stay-At-Home directives on May 1, 2020 in San Diego, California. - Rallies have been held at several state capitols across the country as protesters express their deep frustration with the stay-at-home orders that are meant to stem the spread of the novel coronavirus. (Photo by SANDY HUFFAKER/AFP via Getty Images)

(CNSNews.com) - In a 6-3 decision last week, the Supreme Court granted an injunction in favor of South Bay Pentecostal Church and Harvest Rock Church by striking down California’s total ban on indoor church services in the state thus allowing churches to open at 25 percent capacity.

Concurring justices remained split on the issue of Newsom’s singing and chanting ban, allowing that restriction to stand.

In a statement written by Justice Neil Gorsuch and joined by Justices Samuel Alito and John Roberts, they highlighted the difference in treatment that California gave religious institutions and secular establishments.

The brief stated, “When a State so obviously targets religion for differential treatment, our job becomes that much clearer. As the Ninth Circuit recognized, regulations like these violate the First Amendment unless the State can show they are the least restrictive means of achieving a compelling government interest.”

“JUSTICE BARRETT, with whom JUSTICE KAVANAUGH joins, concurring in the partial grant of application for in-junctive relief.

I agree with JUSTICE GORSUCH’s statement, save its contention that the Court should enjoin California’s prohibition on singing and chanting during indoor services. The applicants bore the burden of establishing their entitlement to relief from the singing ban. In my view, they did not carry that burden—at least not on this record. As the case comes to us, it remains unclear whether the singing ban applies across the board (and thus constitutes a neutral and generally applicable law) or else favors certain sectors (and thus triggers more searching review). Of course, if a chorister can sing in a Hollywood studio but not in her church, California’s regulations cannot be viewed as neutral. But the record is uncertain, and the decisions below unfortunately shed little light on the issue. As the order notes, however, the applicants remain free to show that the singing ban is not generally applicable and to advance their claim accordingly.”

“Justices of this Court are not scientists. Nor do we know much about public health policy. Yet today the Court displaces the judgments of experts about how to respond to a raging pandemic. The Court orders California to weaken its restrictions on public gatherings by making a special exception for worship services. The majority does so even though the State’s policies treat worship just as favorably as secular activities (including political assemblies) that, according to medical evidence, pose the same risk of COVID transmission. Under the Court’s injunction, the State must instead treat worship services like secular activities that pose a much lesser danger. That mandate defies our case law, exceeds our judicial role, and risks worsening the pandemic.”