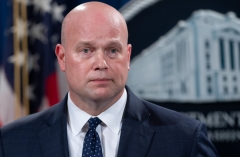 A new legal nonprofit aims to defend the rights that institutions ranging from the Biden Administration to the Southern Poverty Law Center are stripping away, Matt Whitaker, who served as acting attorney general under President Donald Trump, relayed to CNSNews in a Thursday interview.

Whitaker, along with former Trump senior advisor Stephen Miller, chief of staff Mark Meadows, and more sit on the board of directors at America First Legal Foundation. As its first effort, the group is serving as outside counsel for Texas Attorney General Ken Paxton in suing the Biden Administration to prevent illegal aliens potentially infected with COVID-19 from being released into Texas, according to a press release. Whitaker expanded on the group's direction in an interview with CNSNews.

"I’m looking at things like D.C. statehood, I’m looking at the Second Amendment restrictions that are coming down the pipe," the former acting attorney general told CNSNews. "I think as a group, we continue to identify areas that were illegally included in the $1.9 trillion stimulus package that was passed recently by the Democrats and so I think there’s a lot. There’s very fertile ground in this space."

Below is a full transcript of the interview.

Rob Shimshock: Hello there. My name is Rob Shimshock, commentary editor at CNSNews and today I’m speaking with Matt Whitaker, who served as former President Donald Trump’s acting attorney general and who now sits on the board of directors of America First Legal, a new nonprofit that deals with the legal system in a rather novel way. Matt, thanks for joining us today.

Matt Whitaker: I’m very glad to be with you today.

Shimshock: So while it's traditionally been weaponized by left-wing activists to strip Americans of their liberties, you and your team, which includes Trump’s Senior Advisor Stephen Miller, Chief of Staff Mark Meadows, and more are going to use the legal system to defend Americans’ rights. So first, Matt, I’d like for you to diagnose for us the problem and what I mean is, how exactly has the left used organizations like the Southern Poverty Law Center, the American Civil Liberties Union, and others to encroach upon Americans’ freedoms? What mechanisms have they used and to what effect?

Whitaker: Yeah. Well, I saw first-hand at the Department of Justice in the Trump Administration how these groups were used to file lawsuits all over the country, but oftentimes in California in the Ninth Circuit to get nationwide injunctions and frustrate many of the legitimate policy decisions that the president had made to protect the American people or to otherwise advance the American interests, and so, you know, this is what America First Legal is set up to do, is to have a counterweight to those groups that you named and at the same time to protect the legacy of the America First agenda and also to make sure that the Biden Administration does not infringe upon Americans’ rights and constitutional liberties that we’re seeing everyday, happening before our very eyes.

Shimshock: Gotcha. Now how does America First Legal hope to use some of these same mechanisms or perhaps others, but in defense of these fundamental rights?

Shimshock: Gotcha. So we’ve seen quite a few offenses from the left on a number of fronts in just the first few months of this year. We’ve had Big Tech banning a sitting U.S. president, corporations threatening states that don't let biological men compete in women’s sports, the most naked incentivizing of illegal immigration perhaps ever. Can you identify for me one or two of America First Legal’s most urgent policy areas and any specific cases within those that are on your radar?

Whitaker: Yeah. We have so many right now and we’re getting ready to announce within the week our first action, where we’re joining with a big state to advance states' rights and to prevent bad policy and illegal policy from being implemented by this administration but, at the same time, I’m looking at things like D.C. statehood, I’m looking at the Second Amendment restrictions that are coming down the pipe. I'm looking at -- I think as a group, we continue to identify areas that were illegally included in the $1.9 trillion stimulus package that was passed recently by the Democrats and so I think there’s a lot. There’s very fertile ground in this space and obviously what's happening at the border and in our immigration laws is an area that we’re going to spend a lot of time as well.

Shimshock: Okay. Now we’ve seen coverage during the past few years about corrupt prosecutors funded by George Soros, the potential for a tainted jury, which could’ve played a role in the George Floyd verdict, and we’ve seen ostensibly conservative justices on the Supreme Court make some rather questionable decisions. If you could pinpoint today an element of the legal system that is the most flawed, which would it be and how would you fix it?

Whitaker: Well, I really think that one of the biggest challenges we face are left-wing judges -- and we saw this in the Trump Administration -- issuing nationwide injunctions. I think that is a real challenge to the future of our republic. I think the Supreme Court is ultimately going to do something about that. I also think, as you point out, some of these local prosecutors, we’re seeing it, whether it's in New York City or whether it's in Portland, where they lack the courage to enforce the laws and I think some of these citizens are voting with their feet. They’re moving to places that are better run and willing to enforce the laws because, remember, the laws protect everybody and the police obviously are enforcing the laws to protect everybody, but you know, the most vulnerable in our society are the ones that are hurt the most when the laws are not enforced.

Shimshock: Okay. Now for the folks at home who are interested in getting involved, how can they support America First Legal and is there a means for them to influence the cases you tackle?

Whitaker: Our website is aflegal.org. I think they should visit that. Obviously, you can donate to our cause. We’re looking for a well-funded grassroots effort. We’re well on our way to having the resources we need to advance this agenda and I think you can also sign up and drop us a note and tell us the types of cases that you either think are available and we should be involved, or are coming up and how we can help advance this cause. So I appreciate it, everybody that visits our website at aflegal.org.

Shimshock: Excellent. Well, thanks so much for joining me, Matt, and please keep us in the loop about American First Legal’s initiatives.

Shimshock: It seems like you've got your work cut out for you.

Whitaker: Alright, thank you. It's going to be a fun ride.