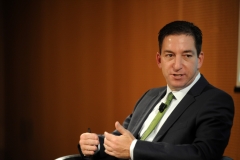 Glenn Greenwald speaks during the presentation of his book "No Place to Hide: Edward Snowden, The NSA, And The U.S. Surveillance State" on May 26, 2014 in Milan, Italy. (Photo credit: Pier Marco Tacca/Getty Images)

Journalist Glenn Greenwald announced Wednesday his resignation from an outlet he co-founded, alleging that "Biden-supporting" editors at The Intercept had censored a piece he had authored.

"The Intercept’s editors, in violation of my contractual right of editorial freedom, censored an article I wrote this week, refusing to publish it unless I remove all sections critical of Democratic presidential candidate Joe Biden, the candidate vehemently supported by all New-York-based Intercept editors involved in this effort at suppression," Greenwald wrote on his Substack site.

The journalist, known for publishing reports sourced from documents leaked by Edward Snowden, had co-founded The Intercept in 2013.

"The current iteration of The Intercept is completely unrecognizable when compared to that original vision. Rather than offering a venue for airing dissent, marginalized voices and unheard perspectives, it is rapidly becoming just another media outlet with mandated ideological and partisan loyalties, a rigid and narrow range of permitted viewpoints (ranging from establishment liberalism to soft leftism, but always anchored in ultimate support for the Democratic Party), a deep fear of offending hegemonic cultural liberalism and center-left Twitter luminaries, and an overarching need to secure the approval and admiration of the very mainstream media outlets we created The Intercept to oppose, critique and subvert."

Later Wednesday, he published the piece in question on his Substack site, where he intends to continue reporting.

"This was not an easy choice: I am voluntarily sacrificing the support of a large institution and guaranteed salary in exchange for nothing other than a belief that there are enough people who believe in the virtues of independent journalism and the need for free discourse who will be willing to support my work by subscribing," Greenwald said.

"I could not sleep at night knowing that I allowed any institution to censor what I want to say and believe — least of all a media outlet I co-founded with the explicit goal of ensuring this never happens to other journalists, let alone to me, let alone because I have written an article critical of a powerful Democratic politician vehemently supported by the editors in the imminent national election."

Let's be clear. I'm sure there are many things I don't agree with Glenn Greenwald about, but he is a dying breed, a real journalist. And this man has guts. https://t.co/bAr0SSXqRJ

CNSNews reached out to Reed and First Look Media for comment, but have not received one at this time.