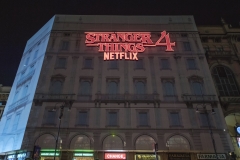 (CNS News) -- During its first four seasons, Netflix’s “Stranger Things” aired an overall 217% increase in profanity and an overall 307% increase in violence, despite keeping a TV-14 rating, according to a new Parents Television and Media Council (PTC) report.

While the single use of “f**k” on cable television usually warrants a “TV-MA” rating, Netflix’s hit sci-fi and horror series “Stranger Things” has featured it over 20 times from Season 1 to Season 4.

There was also a steep spike in graphic violence (756%) across the total four seasons.

Still, “Stranger Things” has a strong reach to younger viewers.

The hashtag #StrangerThings currently has 73.5 billion views on TikTok, a social media platform with 10-19 year-olds comprising the largest age demographic. 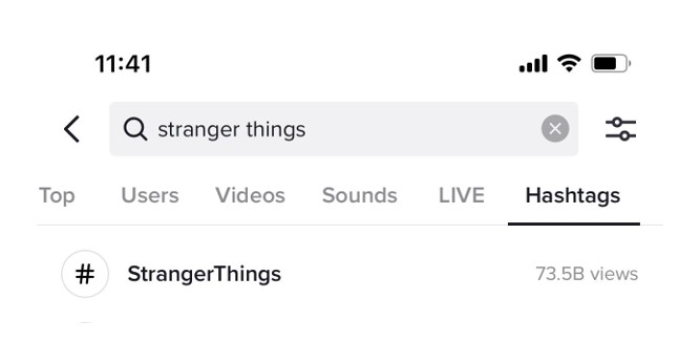 Escalations in the series’ profanity and violence, despite maintaining a TV-14 rating, prompted the PTC to demand a consistent rating standard between streaming and broadcast programs. 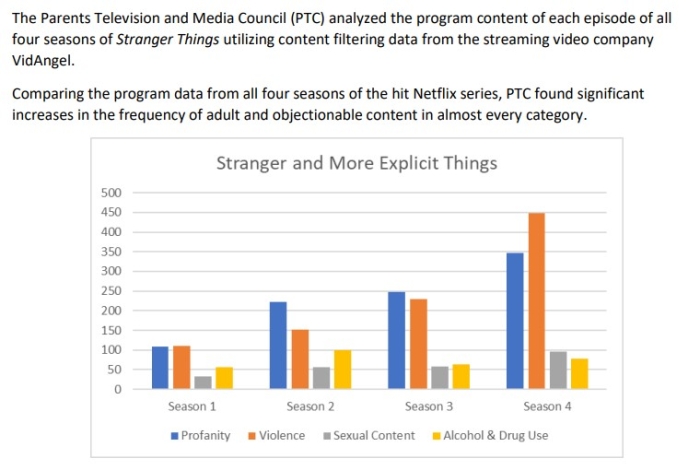 “Parents deserve a ratings system that is transparent and consistent across platforms,” the PTC states in its report. “Our report suggests there to be a vastly different standard between streaming content and broadcast content – even if that content is similarly-rated. If a TV-14 doesn’t mean the same thing on Netflix as it does on CBS, it is of little to no value to parents.

The PTC called the series’ TV-14 rating an example of “ratings creep,” the belief that adult content in TV shows increases while keeping the same child-appropriate rating.

“Parents who rely on Netflix for accurate age-based content ratings and appropriate age-based recommendations with respect to Stranger Things will likely be exposing their children to harsh profanity and graphic violence,” the PTC said.

“Either the content is being rated inaccurately, or there has been considerable ‘ratings creep’ with the criteria used to determine an age-based rating,” the PTC claimed. 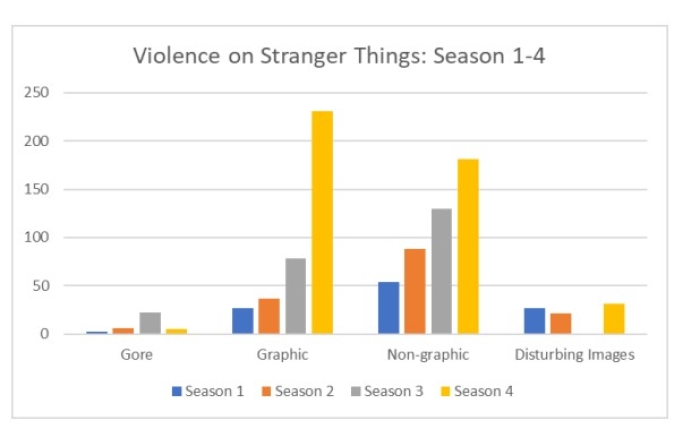 “Neither option allows parents to do their job effectively," said the organization. "Parents need to be aware, and Netflix needs to adjust the age-based content rating to reflect the significantly higher levels of adult content in this latest season of Stranger Things.”

Netflix is one of numerous streaming services that are not regulated by the Federal Communications Commission (FCC), which oversees age ratings on major broadcast and cable networks.

Nearly 90% of parents find the TV ratings system helpful, according to a 2020 survey by the rating system TV Parental Guidelines.

“Stranger Things” currently ranks #1 in most popular TV series, a ranking granted by over 1 million votes on IMDB.