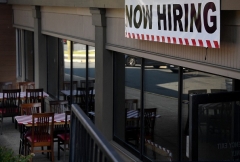 A "Now Hiring" sign is seen outside a restaurant in Arlington, Virginia. (Photo by OLIVIER DOULIERY/AFP via Getty Images)

Persons who are neither employed nor unemployed are not in the labor force. This category includes retired persons, students, those taking care of children or other family members, and others who are neither working nor seeking work.

Among those not in the labor force in October, 1.3 million persons said they were prevented from looking for work due to the pandemic. This measure is down from 1.6 million in September.

With so many people not in the labor force, the labor force participation rate has remained stubbornly low in recent years, and it did not budge in October.

In October, the civilian non-institutional population in the United States was 261,908,000. That included all people 16 and older who did not live in an institution, such as a prison, nursing home or long-term care facility.

Of that civilian non-institutional population, 161,458,000 were participating in the labor force, meaning they either had a job or were actively seeking one during the last month. This resulted in a labor force participation rate of 61.6 percent in October, the same as September -- and only 0.2 points higher than the 61.4 percent when Biden took office.

The Congressional Budget Office has noted that a lower labor force participation rate is associated with lower gross domestic product and lower tax revenues. It is also associated with larger federal outlays, because people who are not in the labor force are more likely to enroll in federal benefit programs, including Social Security.

BLS said 531,000 jobs were added to nonfarm payrolls in October, which was above analysts' estimates. That compares with the initial disappointing showing of 194,000 jobs added in September. But that 194,000 has been revised upward to 312,000 jobs added in September. BLS also said the change in total nonfarm payroll employment for August was revised up by 117,000, from +366,000 to +483,000.  With these revisions, employment in August and September combined is 235,000 higher than previously reported.

According to BLS, job growth was widespread, with notable job gains in leisure and hospitality, in professional and business services, in manufacturing, and in transportation and warehousing. Employment in public education declined over the month.

This is the lowest unemployment rate since the 4.4 percent recorded in March 2020 under President Donald Trump. The Trump-era low was 3.5 percent.

In October, 3.8 million persons reported that they had been unable to work because their employer closed or lost business due to the pandemic. This measure is down from 5.0 million in September.