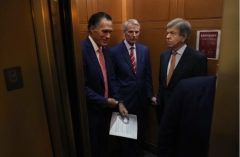 Senators Mitt Romney, Rob Portman and Roy Blunt in an elevator at the U.S. Capitol. (Photo by Kevin Dietsch/Getty Images)

(CNSNews.com) - In a statement someone wrote for him on Wednesday, President Joe Biden hailed the Senate's 62-37 vote to advance the "Respect for Marriage Act," a bill that says no state may prohibit marriage between two individuals on the basis of sex, race, ethnicity, or national origin of those individuals.

The bill codifies same-sex marriage, a right conferred by the U.S. Supreme Court in 2015.

"Love is love, and Americans should have the right to marry the person they love," Biden said in his statement.

"Today’s bipartisan vote brings the United States one step closer to protecting that right in law. The Respect for Marriage Act will ensure that LGBTQI+ couples and interracial couples are respected and protected equally under federal law, and provide more certainty to these families since the Supreme Court’s decision in Dobbs.

"I want to thank the Members of Congress whose leadership has sent a strong message that Republicans and Democrats can work together to secure the fundamental right of Americans to marry the person they love. I urge Congress to quickly send this bill to my desk where I will promptly sign it into law."

Sen. Tammy Baldwin, a lesbian Wisconsin Democrat and co-sponsor of the bill, said Wednesday's vote gives "millions of loving couples the certainty, dignity, and respect that they need and deserve."

Many of the 37 Republicans voting against the bill cited concerns about religious freedom.

"I just voted against the 'Respect for Marriage Act' that is supposed to protect gay marriage without creating risks to religious freedom and religious institutions," Sen. Lindsey Graham (R-S.C.) tweeted.

Sen. James Lankford (R-Okla.) also tweeted about his "no" vote: "All Americans should be honored and no one should be discriminated against -- no one. The Respect for Marriage Act isn’t about equality or maintaining the status quo. It is about silencing and disadvantaging people that disagree."

Franklin Graham, the Christian evangelist, tweeted: "The bill strikes a blow at religious freedom for individuals & ministries & is really the 'Destruction of Marriage Act.'"

As the Heritage Foundation noted this past summer when the House passed the bill, the "Respect for Marriage Act" "isn't about marriage or respect at all. It's about imposing the radical left's sexual ideology as state orthodoxy.

"Final passage would mean states no longer are allowed to define and recognize marriage as a legal union between a man and a woman. Instead, they would be forced to recognize any union between two individuals, regardless of sex, as marriage...

"...By radically redefining marriage and eviscerating states’ rights, the bill would transform matters of disagreement—even on the basis of deeply and sincerely held religious belief—into discrimination. Those who refuse to submit—whether states, government officials, or any the U.S. attorney general deems to be “acting under the color of State law” -- would be punished for their beliefs."