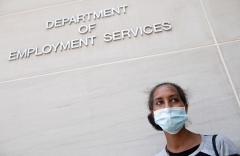 A woman stands outside the D.C. Department of Employment Services on July 16, 2020 after trying to find out about her unemployment benefits. (Photo by SAUL LOEB/AFP via Getty Images)

(CNSNews.com) - It's been almost five months since the emerging COVID pandemic crashed what had been a strong and record-breaking employment streak under President Donald Trump.

The number of employed broke 25 records under President Trump, most recently in December 2019 when 158,803,000 people were counted as employed.

People are considered employed if they did any work at all for pay or profit during the survey reference week. This includes all part-time and temporary work, as well as full-time, year-round employment.

(In its July update, the Congressional Budget Office said it expects the labor market to improve, but it also projects the unemployment rate will remain higher through 2030 than it was before the pandemic.)

In July, the civilian non-institutional population in the United States was 260,363,000. That included all people 16 and older who did not live in an institution (such as a prison, nursing home or long-term care facility).

Of that civilian non-institutional population, 159,870,000 were participating in the labor force, meaning they either had a job or were actively seeking one during the last month. This resulted in a labor force participation rate of 61.4 percent, down a tenth of a point from 61.5 percent in June, and well below the Trump-era high of 63.4 percent set this past January and February.

The labor force is made up of the employed and the unemployed. The remainder -- those who have no job and are not looking for one -- are counted as “not in the labor force," and this number went up slightly in July.

BLS notes that many people who are not in the labor force are retired, going to school, or have family responsibilities that prevent them from working. But now, widespread school closures are forcing some parents out of the labor force, a concern that President Trump continues to express.

“My view is, the schools should open. This thing is going away,” Trump told “Fox & Friends” on Wednesday morning, referring to the coronavirus. “It will go away like things go away, and my view is that schools should be open.”

Following the whopping job losses of 20.7 million in April, the economy added 1.8 million jobs in July, compared with 4.7 million in June, and 2.7 million in May.

President Trump said on Wednesday he was expecting a "big jobs number" from BLS.  "Our economic recovery "looks like a very strong 'V,'" Trump said.  "But the Democrats are standing in our way," he added. They don't want their states open, even if the state is in good shape. Because, you know, much of the country's in really good shape."