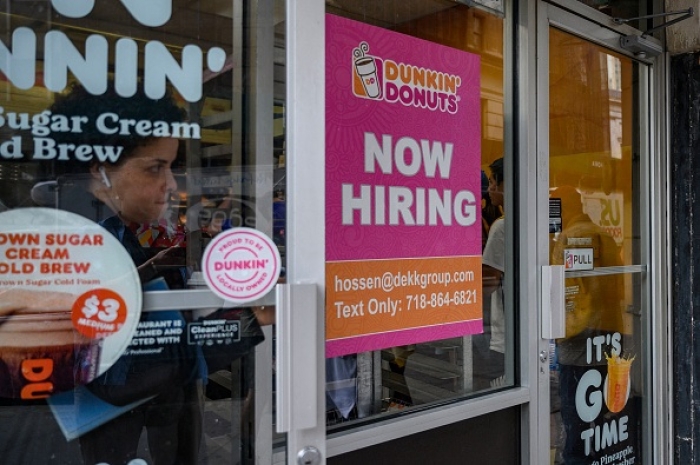 People walk past a "Now Hiring" sign in New York City on July 8, 2022. (Photo by ANGELA WEISS/AFP via Getty Images)

The U.S. Bureau of Labor Statistics reports that job growth was widespread, led by gains in leisure and hospitality, professional and business services, and health care. "Both total nonfarm employment and the unemployment rate have returned to their February 2020 pre-pandemic levels," BLS noted.

The “not in the labor force” category includes retired persons, students, those taking care of children or other family members, and others who are neither working nor seeking work.

People who don't have a job and aren't looking for one put downward pressure on the important labor force participation rate, which dropped a tenth of a point to 62.1 percent in July.

According to the Congressional Budget Office, a lower labor force participation rate is associated with lower gross domestic product (GDP) and lower tax revenues. It is also associated with larger federal outlays, because people who are not in the labor force are more likely to enroll in certain federal benefit programs.

In July, the civilian non-institutional population in the United States was 264,012,000. That included all people 16 and older who did not live in an institution, such as a prison, nursing home or long-term care facility.

Of that civilian non-institutional population, 163,960,000 were participating in the labor force, meaning they were either employed or unemployed -- they either had a job or were actively seeking one during the last month. This resulted in a labor force participation rate of 62.1 percent in July, down from 62.2 percent in June.

The participation rate was 61.4 percent when Joe Biden took office as the pandemic raged. Today's number, 62.1 percent, is still below the Trump-era high of 63.4 percent in February 2020, just before COVID shut things down.

The change in total nonfarm payroll employment for May was revised up by 2,000, from +384,000 to +386,000, and the change for June was revised up by 26,000, from +372,000 to +398,000. With these revisions, employment in May and June combined is 28,000 higher than previously reported. (Monthly revisions result from additional reports received from businesses and government agencies since the last published estimates and from the recalculation of seasonal factors.)

The July report indicates that the COVID pandemic continues to affect workers:

In July, 2.2 million persons reported that they had been unable to work because their employer closed or lost business due to the pandemic. This measure is little changed from the previous month.

Among those not in the labor force in July, 548,000 persons said they were prevented from looking for work due to the pandemic, little changed from the prior month.

CBO notes that since the mid-2000s, the overall rate of labor force participation (for people age 16 or older) in the United States has declined substantially, driven predominantly by the aging of the population.

"Because that aging is likely to continue, CBO expects the decline in participation to persist during the first half of the 30-year projection period before stabilizing in the second half of the period," the report said. "As a result, the labor force is expected to grow more slowly than the number of people age 16 or older for the first two decades of the period and at roughly the same pace as the number of people age 16 or older in the third decade."

In contrast to the aging of the population, CBO said it expects two long-term trends to boost participation in the labor force:

The population is becoming more educated, and people with more education tend to participate in the labor force at higher rates than do people with less education. And increasing longevity is expected to lead people to continue working until increasingly older ages.

But CBO said it expects those two trends to be mostly offset by other trends that will put downward pressure on the labor force participation rate.