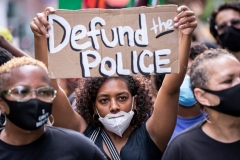 The call to "Defund the Police" is a popular slogan at Black Lives Matter rallies across the nation and at this one on June 19 in New York. (Photo by Ira L. Black/Corbis via Getty Images)

(CNSNews.com) - Attorney General William Barr said demonstrations and protests "are fine," up to a point:

But when they become mob violence, we need to restore public order. We can't be ruled by mobs. We have to be ruled by the legal process.

Now, in this particular situation, there's obviously legitimate demonstrators out there raising concerns about police abuse. But a lot of these demonstrations have been hijacked by essentially anarchistic groups and professional agitators, who are really in it just for the violence and the confrontation.

And so I do make a distinction between legitimate, peaceful demonstrators and these violent agitators who are involved throughout the country.

Barr told "Sunday Morning Futures" it is the job of the Justice Department "to mete out justice fairly and even-handedly...and not be influenced by the mob."

Host Maria Bartiromo asked Barr if the federal government has a responsibility to protect citizens if cities and states don't do it.

“Well, in the first instance, it's the responsibility, obviously, of the local officials and then the state officials to protect the rights of their citizens. At the end of the day, the federal government does have a responsibility to make sure that citizens are not deprived of their federal rights.”

Barr wouldn't say what the federal government may or may not do about the "autonomous" zone in Seattle.

"Well, I don't want to get into specifics, but we're obviously keeping an eye on it. And, as the president said, in due course, we may have to do something about it. But we can't let it go on indefinitely."

Barr said he is worried about law enforcement officers quitting their jobs, given the recent hostility and calls from the left to "defund the police."

And, obviously, this environment, where they're demonized, will deter a lot of people from continuing to serve as police. And, also, I'm concerned of the effect, that they may pull back some of their enforcement activities and not take those risks.

So, I think it could lead, as it's led in other situations, to an actual increase in violent crime and more deaths.

The -- you know, I understand an event like Minneapolis and why it struck such a chord in the African-American community. There has been longstanding distrust of law enforcement. And that partly comes out of the fact that, for much of our history, our laws were explicitly discriminatory.

And for the past few decades, we have been reforming our institutions to make sure they reflect our values. And the police have been engaged in that. And we shouldn't let this incident and the actions of a bad few obscure the fact that the police have made a lot of progress.

Instances of the shooting of black unarmed males has been dropping. It was 38 five years ago. Last year, it was 10 --10 in the nation. And six of those were involved in attacking the police officers at the time they were shot.

So, while any death is too many, the fact is that, in proportion, it's relatively small. I mean, there are 8,000, roughly 8,000 homicides of African-Americans in our country every year, 8,000. Ten last year were due to force by shooting an unarmed black male.

And that reform has to continue. And what we have to do is bring out of these episodes, Minneapolis, something that's good, and that is, it will galvanize the public will to continue that process of reform. But it has to be fair reform to the police.

Barr said he does think racism exists in this country, but he doesn't think there is "systemic" racism on law enforcement. "I think there may be individuals, and there are individuals, who may have bias. And, sometimes, that may emerge and be manifested in some act. But I don't think it's systemic."