AG Garland Warns Harvard Grads, 'Magnitude' of January 6 Must Not Be 'Downplayed or Understated' 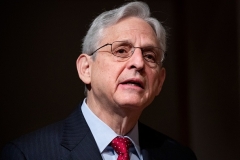 (CNSNews.com) - "Don’t let your generation be defined by the pandemic. Let it be defined by public service," Attorney General Merrick Garland told Harvard's class of 2020/2021 on Saturday -- students whose graduation ceremonies were delayed by COVID.

Garland devoted most of his speech to what he called "threats to democracy," three in particular -- "the right to vote," "violence and threats of violence" and the events of January 6, "when a violent mob stormed the United States Capitol."

He said the “magnitude” of that event must not be “downplayed or understated,” as congressional Democrats continue to subpoena Republicans as part of their ongoing investigation, which Republicans say is politically motivated -- a continuing effort to vilify Donald Trump and his supporters.

Garland told the graduates, "The promise of democracy is that people will not employ violence” to affect an election outcome. “And yet, we saw that promise tested on January 6, 2021."

He described the events of January 6, when "a large crowd violently forced entry into the Capitol."

"We all watched as police officers were punched, dragged, tased, and beaten. We saw journalists targeted, assaulted, tackled, and harassed. Members of Congress had to be evacuated.

“And proceedings were disrupted for hours — interfering with a fundamental element of American democracy: the peaceful transfer of power from one administration to the next.”

Garland mentioned the ongoing investigation into the January 6 attack: "We will follow the facts wherever they lead," he said -- without mentioning Donald Trump's name.

Garland emphasized the "magnitude" of the Jan. 6 attack by an unruly mob in which the only person shot and killed was an unarmed protester:

"Finally, the preservation of democracy requires our willingness to tell the truth," he said. "Together, we must ensure that the magnitude of an event like January 6th is not downplayed or understated. The commitment to the peaceful transfer of power must be respected by every American. Our democracy depends upon it."

Garland accused the Supreme Court, lower courts, and state legislatures of weakening the right to vote.

"Those efforts threaten the foundation of our system of government. And there may be worse to come. Some have even suggested giving state legislatures the power to set aside the choice of the voters themselves. That is not the way a representative democracy is supposed to work."

(What Garland and his fellow Democrats regard as voter suppression, many Republicans view as voting safeguards. Garland did not give specific examples of how the right to vote is supposedly threatened.)

"We have all seen the violence and threats of violence that have been directed at people solely because of who they are, where they are from, what they look like, whom they love, how they worship, or what they believe...We have also seen the violence and threats of violence directed against Americans who serve and interact with the public at every level — many of whom make our democracy work every day.

"These are our fellow citizens — who administer our elections, ensure our safe travel, treat the sick, teach the children, report the news, represent their constituents, ensure the rule of law, and keep our communities safe. These threats and acts of violence are permeating so many parts of our national life that they are becoming normalized and routine."

Garland told the graduates, "We need you. The responsibility to preserve democracy, and to maintain faith in its legitimacy, lies with all of us...."

He said graduates who engage in public service "can build and rebuild the institutions upon which a functioning democracy depends. Those of you who will dedicate a part of your lives to community service can stitch back together the fabric of our civil society. You can overcome the polarization that is tearing us apart.

"And all of us must take care in the way we treat each other. We must persuade our neighbors and our communities to reject the idea that violence or threats of violence are acceptable. We must work to dissipate the hatred that fuels such violence," he said.

"A democracy cannot survive if its citizens forsake the rule of law in favor of violence or threats of violence. We are all in this together. We must protect each other."