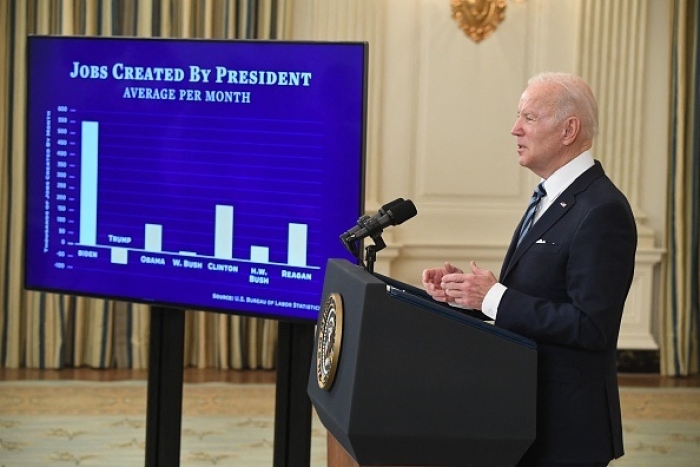 (CNSNews.com) - Non-farm payrolls added 428,000 jobs in April, in line with the the consensus estimate of around 400,000, the Labor Department's Bureau of Labor Statistics reported on Friday.

The April unemployment rate held steady at 3.6 percent, the same low rate as it was in March. But the labor force participation rate is moving in the wrong direction.

In April, the civilian non-institutional population in the United States was 263,559,000. That included all people 16 and older who did not live in an institution, such as a prison, nursing home or long-term care facility.

Of that civilian non-institutional population, 164,046,000 were participating in the labor force, meaning they were either employed or unemployed -- they either had a job or were actively seeking one during the last month. This resulted in a labor force participation rate of 62.2 percent in April, down from 62.4 percent in March.

The participation rate was 61.4 percent when Joe Biden took office. Today's number, 62.2 percent, is still below the Trump-era high of 63.4 percent in February 2020, just before COVID shut things down.

This not-in-the-labor-force group has continued to grow over time, boosted by the growing number of Baby Boom retirees. But the number continues to drift down from the all-time pandemic high of 103,538,000 in April 2020, when millions of Americans dropped out of the labor force.

As Federal Reserve Chairman Jerome Powell said earlier this week, the labor market is "unbalanced" because there aren't enough willing workers to fill the available jobs. BLS reports the number of job openings reached a record high of 11.5 million on the last business day of March.

"The labor market has continued to strengthen and is extremely tight," Federal Reserve Chairman Jerome Powell told a news conference on Wednesday.

"Labor demand is very strong, and while labor force participation has increased somewhat, labor supply remains subdued. Employers are having difficulties filling job openings, Powell said, noting that there are almost 2 job vacancies for every one unemployed person.

"There's a labor shortage," Powell said. "There aren't enough people to fill these job openings and companies can't hire. And -- and -- and wages are moving up at -- at levels that would not over time be consistent with 2 percent inflation over time.

"And of course, everyone loves to see wages go up, and it's a great thing, but you want them to go up at a sustainable level, because these wages are, to some extent, being eaten up by inflation.

"So, what that really means is, to get the kind of labor market we really want to get -- we really want to have a labor market that serves all Americans, especially the people in the lower income part of the distribution, especially them. To do that, you've got to have price stability (lower inflation). And we've got to get back to price stability so that we can have a labor market where people's wages aren't being eaten up by inflation and where we can have a long expansion, too."

Powell said the goal is to bring the supply of labor and the demand for labor back into balance:

"So we think through our policies, through further healing in the labor market, higher rates, for example, of vacancy-filling and things like that, and more people coming back in, we like to think that supply and demand will come back into balance and that, therefore, wage inflation will moderate to still high levels of wage increases, but ones that are more consistent with 2 percent inflation. That's -- that's our expectation."

Powell said it's a "good time to be a worker" who's looking to either change jobs or get a pay raise in their current job: "So it's a strong economy, and -- and nothing about it suggests that it's -- that it's close to or vulnerable to a recession. Now, of course, given events around the world and fading fiscal policy effects and -- and higher rates, you -- you could see some slower economic activity."

The business and economic reporting of CNSNews.com is funded in part with a gift made in memory of Dr. Keith C. Wold.
donate
mrc merch