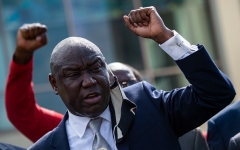 Floyd family attorney Benjamin Crump and members of the Floyd family hold a press conference during the public viewing for George Floyd in Houston, Texas on June 8, 2020. (Photo by ANDREW CABALLERO-REYNOLDS/AFP via Getty Images)

(CNSNews.com) - On the day the trial of former police officer Derek Chauvin was scheduled to start in Minneapolis, Benjamin Crump, the attorney for George Floyd's family, rejected suggestions that this is a tough case.

He said the defense will engage in "character assassination," seizing on "trace amounts" of drugs in Floyd's system; and he described the trial as a "referendum" on racial justice in the United States.

"Today starts a landmark trial that will be a referendum on how far America has come in its quest for equality and justice for all," Crump said at a pre-trial news conference intended to try the case in the court of public opinion:

Now, I know everybody can quote the Declaration of Independence, but this trial is going to provide evidence of whether we really believe it when we say we hold these truths to be self-evident, that all men are created equally. That they are endowed by their Creator with certain inalienable rights that amongst them are life and liberty and the pursuit of happiness.

And for all of those people...that will continue to say that this is such a difficult trial, that this is such a hard trial -- well, we rebuke that. Because we know if George Floyd was a white American citizen and he suffered this painful, torturous death with a police officer kneeling on his neck, nobody -- nobody will be saying this is a hard case.

And when people ask you -- activists, and the family thanks the activists; when people ask you, well, isn't this a tough case because they're going to try to say George Floyd had a trace amount of drugs in his system, you let them know that Ben Crump said that George Floyd was living, breathing, walking and talking just fine until the police put him face down and put him in handcuffs and put a knee on his neck for 8 minutes and 46 seconds.

Crump mentioned that the Floyd family has received "civil justice" with a "historic $27-million settlement that not only included compensation for the family but also policy reform, and that is important, but that's only a part of the justice," he said.

"George Floyd, just like any other citizen, his family is deserving of whole justice, full justice," Crump said. "Black people in America should not only have to get torture justice. We have every right to get whole justice. Civil justice and criminal justice."