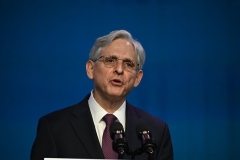 Attorney General Merrick Garland is warning states not to infringe on &quot;reproductive freedom.&quot; (Photo by JIM WATSON/AFP via Getty Images)

(CNSNews.com) - In a ruling this past June, the U.S. Supreme Court said the Constitution does not confer a right to abortion; and it said the authority to regulate abortion resides with "the people and their elected representatives" -- with the states, in other words.

But as state legislatures begin their sessions in this new year, U.S. Attorney General Merrick Garland issued a warning on Monday: Any attempt by the states to ban or restrict abortion may be met with federal intervention of some kind, including lawsuits.

"On the day Roe was overturned, I said the Justice Department would use every tool at its disposal to protect the rights of Americans to their reproductive freedoms. And that is what we have done. That is what we will continue to do," Garland told a news conference.

The task force, he said, monitors state laws to "ensure that states do not infringe on federal protections of reproductive rights."

Garland said the task force is "evaluating appropriate actions" in response to state laws, including filing lawsuits, filing statements of interest, and intervening in private litigation.

Garland explained how the federal government is facilitating abortion, however and wherever it can:

For example, Garland noted that federal law "normally does not prohibit the mailing of mifepristone," the abortion drug.

He said DOJ has worked closely with the Defense Department to allow service members and their dependents to travel out of state for abortions. DOJ also advised the Department of Veterans Affairs on a regulation allowing abortion at VA clinics.

Moreover, "The Justice Department will support and provide representation to any federal employee who is subject to legal actions for appropriately carrying out his or her duties under federal law," Garland said.

He said DOJ is continuing to enforce laws regarding access to both abortion clinics and pregnancy counseling services.

"And we are continuing to offer technical assistance to both Congress and the states on federal constitutional questions related to reproductive health care," Garland said.

Associate AG Vanita Gupta said the DOJ's message "is clear and bears repeating: The Justice Department, through the task force, is committed to doing everything we can to protect continuing lawful access to abortion medication and other reproductive health services."