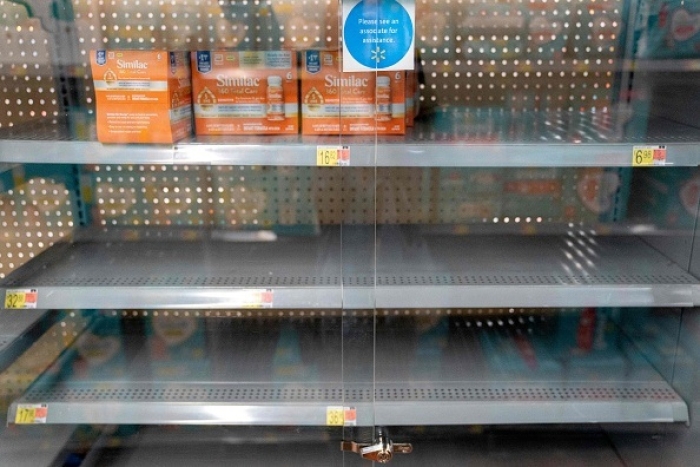 Grocery store shelves sit empty where baby formula is typically stocked in Washington, D.C., on May 11, 2022. (Photo by STEFANI REYNOLDS/AFP via Getty Images)

"While mothers and fathers stare at empty grocery store shelves in a panic, the Biden Administration is happy to provide baby formula to illegal immigrants coming across our southern border," they wrote.

"This is yet another one in a long line of reckless, out-of-touch priorities from the Biden Administration when it comes to securing our border and protecting Americans. Our children deserve a president who puts their needs and survival first – not one who gives critical supplies to illegal immigrants before the very people he took an oath to serve," they said.

The statement comes after Rep. Kat Cammack (R-Fla.) posted a photograph on Twitter purporting to show "shelves and pallets packed with baby formula" at the at the Ursula Border Control processing center in McAllen, Texas, while grocery shelves elsewhere in this country have little if any formula left to sell. 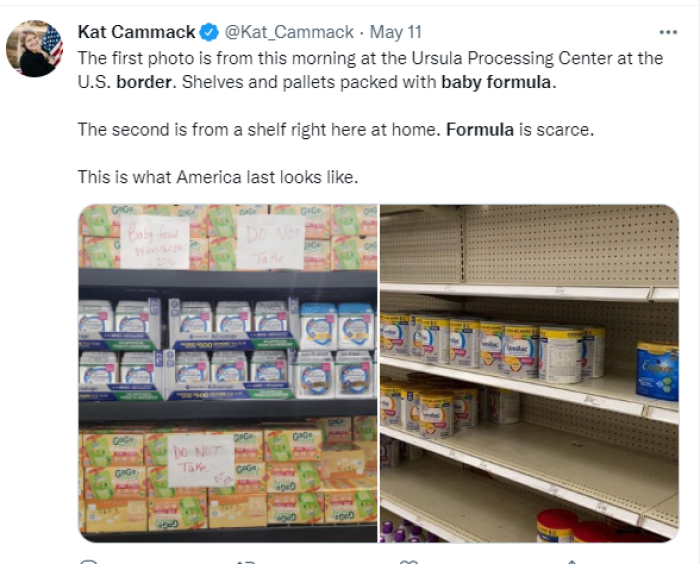 Cammack, speaking with Fox News's Sean Hannity Thursday night, said, "I'm getting word from Border Patrol agents that there is a tractor-trailer full of pallets of baby formula sitting in that store room. Come on, now! This is exactly what America last looks like. You've got parents panicking, kids getting sick, and the humanitarian mission at the border -- the agents are doing the best job that they can but man, their hands are tied."

As Democrats and other Biden supporters blame consolidation in the market for the shortage, Cammack blamed President Biden for the huge supply chain disruption:

"The Biden administration is responsible for this formula shortage. You know, back in November, their own FDA shut the number-one manufacturer of baby formula down on a tip with no plan to backfill the 43 percent that this manufacturer (has as) a part of the market share. So, again, typical Biden administration -- no plan, no contingencies, no way to backfill 43 percent of our nation's supply of baby formula."

Cammack said the Biden administration is all about "America last."

"I heard tonight that they have prohibited rank and file border patrol agents from going into those storerooms because they are panicked that we have exposed this America last agenda. This has to stop. We need to put our kids first, and this has to end. Biden's gotta go, November's coming."

In a statement posted on its website on May 11, Abbott said its voluntary recall of baby formula in February came after four complaints of bacterial contamination in babies who consumed formula produced in its Sturgis, Michigan facility.

"[T]here is no evidence to link our formulas to these infant illnesses," it says.

Abbott says the FDA inspected the Sturgis plant and sent a "list of observations" indicating where Abbott "can improve our systems and protocols," which Abbott said it was already doing.

"We know the recall has worsened an already existing industry-wide infant formula shortage in the U.S. and we've been seeing and hearing the stress and despair of parents who are facing empty shelves," the statement said:

"We deeply regret the situation, and since the recall, we've been working to increase supply at our other FDA-registered facilities, including bringing in Similac from our site in Cootehill, Ireland, by air and producing more liquid Similac and Alimentum.

“We also began releasing metabolic formulas that were on hold earlier this month at FDA's request to those who need these unique formulas.

"We understand the situation is urgent – getting Sturgis up and running will help alleviate this shortage. Subject to FDA approval, we could restart the site within two weeks. We would begin production of EleCare, Alimentum and metabolic formulas first and then begin production of Similac and other formulas.

“From the time we restart the site, it will take six to eight weeks before product is available on shelves."