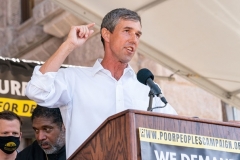 Beto O'Rourke is now running for Texas governor, on local issues, he says. But he did not mention unchecked immigration in his list. He did endorse gun control again. (Photo by SUZANNE CORDEIRO/AFP via Getty Images)

Gun control was and is a major issue in both of his campaigns. In 2020, O'Rourke made headlines for saying, "Hell, yes, we're going to take your AR-15, your AK-47." On Sunday, he stuck to his guns:

Look, we are a state that has a long, proud tradition of responsible gun ownership. And most of us here in Texas do want -- do not want to see our friends, our family members, our neighbors shot up with these weapons of war. So, yes, I still hold this view.

But I also have been listening to my Texans, my fellow Texans who are concerned about this idea of permitless carry that Greg Abbott has signed into law, which allows any Texan to carry a loaded firearm, despite the pleadings of police chiefs and law enforcement from across the state, who said it would make their jobs more dangerous and make it harder for them to protect those that they were sworn to serve in their communities.

Asked to comment on the verdict in the Kyle Rittenhouse trial, O'Rourke said it "makes the case that we should not allow our fellow Americans to own and use weapons that were originally designed for battlefield use."

That AR-15, that AK-47 has one, single, solitary purpose, and that is killing people as effectively, as efficiently, in as great a number, in as little time as possible. We saw that in Kenosha. We saw that in El Paso, Texas, where 23 people were murdered by someone with an AK-47 just in a matter of minutes.

This is crazy. And we should not come to expect this as a matter of course in America. And the thing is, we don't have to.

So, here in Texas, where most of us, including myself, grew up learning how to use firearms responsibly, let's bring that experience and knowledge to bear. Let's protect the Second Amendment. Let's also make sure that we protect one another by having commonsense gun laws. I know that we can do it.

O'Rourke mentioned the issues he plans to campaign on -- abortion, jobs, schools, health care electricity reliability -- but he did not mention the unchecked illegal immigration crisis until host Dana Bash brought it up:

"I don't need to tell you a big issue in your state is immigration," Bash said. "There were a record number of apprehensions at the Southern border this past year, nearly 1.7 million arrests. You said this week that President Biden could -- quote -- "do a better job" at the border. Do you think his policies are contributing to surges there?" Bash asked.

"I don't think we have seen enough urgency when it comes to rewriting our immigration laws to match the needs and the reality that we see, especially in our border communities," O'Rourke replied:

So, yes, we expect more of our president and those who represent us in Congress, but we also expect more of our governor, who's using the border right now as a photo opportunity, scapegoating and vilifying immigrants, asking Texans to -- quote -- "defend themselves" and take matters into their own hands from this invasion, as he describes it.

That's the kind of dangerous rhetoric that inspired that gunman more than two years ago to come to Texas and kill people, claiming that he was defending this state from an invasion of Hispanics who were coming to take over.