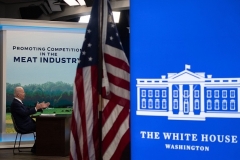 President Joe Biden meets virtually with family and independent farmers and ranchers on Jan. 3, 2022 to discuss price inflation in the meat-processing industry. (Photo by ROBERTO SCHMIDT/AFP via Getty Images)

(CNSNews.com) - President Joe Biden on Monday blamed a lack of competition in the meat processing industry for rising meat prices at the grocery store.

He said four big corporations that control a sizable part of the beef, pork and poultry processing industry are "exploiting" ranchers, farmers, and consumers. But Biden stumbled as he tried to explain how "these middlemen" operate:

But that's only half of it. These companies can use their position as middlemen to overcharge grocery stores and ultimately families. If we're going to hold a second, I was just -- I was telling my colleagues earlier in my office that I was sitting in my kitchen yesterday and there's a sunroom off the kitchen, and my wife was there with her sister and a good friend named Maryanne, and she was saying, "Do you realize it's over $5 for a pound of hamburger meat?" Five dollars?

Well, this is partly -- you know, the pound of beef today cost $5 compared to less than $4 before the pandemic. And here's some historical context. Fifty years ago, ranchers got over $0.60 for every dollar a family spent on beef. Today, they get about $0.39. Fifty years ago, hog farmers got $0.40 to $0.50 for each dollar they spent.

Today, it's about $0.19. And the big companies are making massive profits. While their profits go up, the prices you see at the grocery stores go up commensurate. The prices farmers receive for the products they are bringing to market go down. This reflects the market being distorted by lack of competition.

I've said it before and I'll say it again, "Capitalism without competition is (sic) capitalism, it's exploitation." That's what we're seeing in meat and poultry and those industries now. Small independent farmers and ranchers are being driven out of business, sometimes businesses that have been around for generations.

In reaction, the North American Meat Institute (NAMI) -- which bills itself as a "leading voice" for the meat and poultry processing industry -- said Biden is wrong to blame private industry for price inflation:

"Prices reflect supply and demand in a healthy market," NAMI said in a news release.

"For the third time in six months, President Joe Biden and his Administration announced the same plans to spend $1 billion to fund government intervention in the market in an attempt to increase prices livestock producers receive while blaming inflation on private industry,” said Julie Anna Potts, president and CEO of the North American Meat Institute.

The Biden Administration continues to ignore the number one challenge to meat and poultry production: labor shortages. This tired approach is not surprising because they have refused to engage with the packing and processing sector they attack, going so far as to hold a roundtable on meat packing without a single beef or pork packer present.

Press conferences and using taxpayer dollars to establish government-sponsored packing and processing plants will not do anything to address the lack of labor at meat and poultry plants and spiking inflation across the economy.

The Administration wants the American people to believe that the meat and poultry industry is unique and not experiencing the same problems causing inflation across the economy, like increased input costs, increased energy costs, labor shortages and transportation challenges. Consumers know better.

As economists predicted, producers are seeing higher prices for their cattle because packers have processed the backlog of animals in the system.

The NAMI news release also quoted a tweet issued by economist Larry Summers: "Rising demand, with capacity and labor constraints, are fully sufficient to account for what we observe in meat packing -- Administration claims notwithstanding,” tweeted Summers. “Breaking up meatpacking would in the short run lead to reduced supply which would further increases prices. In general, when government goes to war with industries it discourages investment and subsequent capacity.”

Biden on Monday announced a four-point plan to strengthen competition, "which will bring down costs," he promised.

"First, we're going to invest $1 billion in new and expanded meat and poultry processing capacity, funding that was included in the American Rescue Plan to revive our economy," Biden said.

"To bring in more competition and dignity and more farmers, ranchers, and customers, we're going to invest in new and innovative small businesses and meat processors, the lifeblood of our economy. And when we do this, we'll give farmers and ranchers more options beyond giant processing conglomerates," Biden said.

On that first point alone, NAMI posed the following list of questions:

-- How much extra packing plant capacity does the administration think is needed?

--How high should cattle prices be right now?

--How much will the government sponsored processors be required to pay employees?

--There are many small and medium sized packers in the market today that have never received government support – how will they be affected by the influx of government-sponsored competition?

--Where are the target areas these plants are needed?

--Will the new plants have sufficient labor?

Biden's second point: "We're strengthening rules to protect farmers, ranchers, and other producers. For example, the Department of Agriculture is rewriting the rules under the Packers and Stockyard Act." Biden said the Trump administration "weakened that law, making it possible for the abuse that we're seeing now."

And fourth, Biden said, "We're bringing greater transparency to the industry. A free market isn't truly free without transparency around prices. How do you justify the price? And right now that's largely disappeared in the cattle market, transparency.

“Back in August, the Department of Agriculture took steps to address this and we're going to keep pushing it. And I'm pleased to see that Congress is taking action as well to increase competition and fairness with a bipartisan group of senators now working on legislation to make cattle markets more transparent.