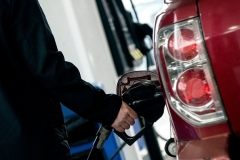 And as soon as he took office, Biden canceled the Keystone pipeline and halted new oil and gas leasing on federal lands.

"You know, in our (Russia) sanctions package, we specifically designed (it) to allow energy payments to continue," Biden told Americans on Thursday:

"We are closely monitoring energy supplies for any disruption. We have been coordinating with major oil producing and consuming countries toward our common interest to secure global energy supplies.

"We are actively working with countries around the world to elevate [he meant 'evaluate'] a collective release from the Strategic Petroleum Reserves of major energy-consuming countries.  And the United States will release additional barrels of oil as conditions warrant.

"I know this is hard and that Americans are already hurting. I will do everything in my power to limit the pain the American people are feeling at the gas pump. This is critical to me."

Yet, the Biden administration has said nothing about increasing U.S. fossil fuel production or reversing some of the president's own energy-crimping policies.

"Today, we imposed an unprecedented package of financial sanctions and export restrictions in lockstep with our allies and partners that will isolate Russia from the global financial system, shut down its access to cutting-edge technology, and undercut Putin’s strategic ambitions to diversify and modernize his economy," Daleep Singh told a White House press conference on Thursday, several hours after Biden spoke.

Singh, a deputy national security advisor, described the sanctions as "the most impactful and significant" the United States has ever imposed on a country. Yet they do not extend to Russia's main source of revenue -- its energy sector.

"We’ve intentionally scoped our sanctions to deliver severe impact on the Russian economy while minimizing the cost to the U.S., as well as our Allies and partners," Singh explained. "To be clear: Our sanctions are not designed to cause any disruption to the current flow of energy from Russia to the world."

Later in the briefing, Singh explained that the sanctions on Russia were designed to be "balanced, so that we can deliver overwhelming costs while not having unintended consequences. And so, that’s the — that’s the principle," he said.

Singh said the most "concentrated impact" is aimed at Russia's foreign capital and cutting-edge technology:

"That’s not to say that we have a dependence on Russia; Russia depends on those revenues just as much as the world needs its energy.

A reporter asked Singh, "Just to follow up...the targeting of the Russian energy industry is totally off the table. Is that what you're saying, Daleep?"

"What I’m saying is that our measures were not designed to disrupt in any way the current flow of energy from Russia to the world," Singh replied.

"Now, we have also said we are going to cut off Russia’s access to cutting-edge technology.  That technology can be used across many sectors.  And so, as it relates to Russia’s long-term productive capacity, we are seeking to degrade that capacity, but nothing — nothing in the short term, as it relates to energy."

"Europe is Russia’s main market for its oil and natural gas exports, and by extension, Europe is its main source for revenues."

And according to Forbes, "The United States imported more gasoline and other refined petroleum products from Russia than any other country in 2021...In 2021, Russia accounted for 21% of all U.S. gasoline imports, with Canada second at 17%."