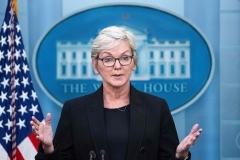 (CNSNews.com) - President Joe Biden "wants to do everything" he can to lower gasoline prices because "he understands the importance of it," Energy Secretary Jennifer Granholm told reporters at the White House on Wednesday.

But doing "everything" does not include attending today's meeting with oil company executives, whom Biden continually vilifies as profiteers.

On Wednesday, she mentioned a few of the topics she intends to cover, including Biden's call for a gas tax holiday:

"It's one of the reasons why I'm meeting with the refiners tomorrow, the oil companies tomorrow, to ensure that they would pass this (cost savings) on," she said. "And we want to make sure that happens."

Before the federal gas tax suspension can happen, Congress must approve it, which is unlikely to happen.

"So let me -- let's see how that conversation goes. I don't want to assume anything. We know that they are feeling the -- the pressure not -- not just from the Administration but from people out there about the price at the pump. And it's important that they listen to their own employees as well as the communities that they serve."

Granholm said she wants to hear from the oil executives if there's a "chink in the supply chain that is preventing some refinery from coming back online? Is there something that's difficult to acquire? Those are the kinds of questions we'll be asking."

Granholm also stressed the need for "a clean energy future," but she said fossil fuels do have a place in that future:

"I mean, let's be very clear that fossil fuels will remain in the mix of the energy system of the globe for years to come. This is why we call this a transition. I mean, the President's goal is to get to net zero by 2050. And that suggests that there will, of course, still be a need for fossil fuels.

Granholm said the immediate goal is for U.S. oil companies to "increase supply."

"We're not ask -- telling them we're going to increase regulation on them. We are -- we are hopeful that they will see the opportunity of investing as well in this clean energy future. In fact, a number of these refineries have -- have transitioned to biofuels, and that's good.