Biden: If Something Isn’t Bipartisan, 'It Doesn't Mean There Wasn't Unity' 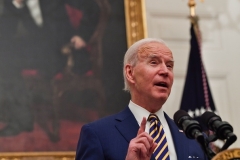 (CNSNews.com) - Asked for his definition of "unity," President Joe Biden told reporters on Monday it means eliminating the "vitriol," accomplishing what "the majority of the American people" want to get done; and aiming for bipartisanship, although if something isn’t bipartisan, "it doesn't mean there wasn't unity -- it just means it wasn't bipartisan," Biden said.

"If you could talk about what you see unity as being...given it is such a key part of your message,” a Washington Post reporter asked Biden:

One is, unity requires you to take away -- eliminate the vitriol -- make anything that you disagree with about the other person's personality or their lack of integrity or they're not decent legislators and the like. So we have to get rid of that. And I think that's already beginning to change, but God know where things go, number one.

Unity also is trying to reflect what the majority of the American people -- Democrat, Republican, independent -- think is within the fulcrum of what needs to be done to make their lives and the lives of Americans better.

For example, if you look at the data -- and I'm not claiming the polling data to be exact -- but if you look at the data you have -- I think it's -- I hope I'm saying this correctly, you may correct me if I get the number wrong -- I think it's 57, 58 percent of the American people, including Republicans, Democrats and independents, think we have to do something about the COVID vaccine.

We have to do something about making sure the people who are -- be hurting badly, can't eat, don’t have food or are in a position where they're about to be thrown out of their apartments, etc., being able to have an opportunity to get a job, that they’re all things we should be  acting, we should be doing more.

Unity also is trying to get, at a minimum, if you pass a piece of legislation that breaks down on party lines but it get passed, it doesn't means there wasn't  unity -- it just means it wasn't bipartisan. I prefer these things to be bipartisan, because I'm trying to generate some consensus and take sort of a -- how can I say it -- the vitriol out of all of this.

Biden said he's "confident" that "a number of Republicans" know that "we have to do something about food insecurity" and about getting children back in school.

He said "anti-union" lawmakers might blame it on the teachers. But others will say we have to "make it safe" for teachers and students.  (At the same news conference, Biden called for making classrooms "safe and secure" through "new ventilation systems," "testing for people coming in and out of the classes," and thorough sanitation.)

Biden said democracy cannot function “without the ability to reach consensus. Otherwise, it just becomes executive fiat or battleground issues that get us virtually nowhere.”

Biden said it would behoove the American people to hear more debate from the Senate, so the public can judge "who they think is right or wrong.”

"So I am optimistic that it may take some time, but over the year, if we treat each other with respect -- and we're going to argue like hell, I'm confident of that, believe me, I know that, I've been there. But I think we can do it in a way that we can get things done for the American people,”  Biden said.