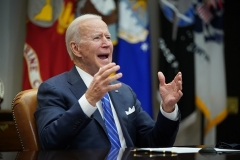 President Joe Biden speaks during a virtual call to congratulate the NASA JPL Perseverance team on the successful Mars landing on March 4, 2021. (Photo by MANDEL NGAN/AFP via Getty Images)

(CNSNews.com) – At the very end of  his video chat with scientists at NASA’s Jet Propulsion Laboratory on Thursday, President Biden thanked the team multiple times – telling them, “there’s not a thing we cannot do when we set our mind to it. So, God bless you all. Thank you. Thanks, Mike,” Biden told JPL Director Mike Watkins.

Then the president of the United States made a curious comment:

“And by the way, I'm like a poor relative, Mike. When I'm invited, I show up. So, be careful. You know, the poor relatives, they show up--they stay longer than they're supposed to. I'm one of those kind of guys.”

Watkins, being gracious, told Biden, “We’ll be more than happy to have you, and stay as long as you want.”

Several minutes earlier, Watkins had told Biden, “We would love to have you out here some day.”

Biden made the video call to congratulate the NASA engineers on the successful Mars landing of the Perseverance rover last month.