Biden, in Ohio, Asks If He's Supposed to Keep His Mask On 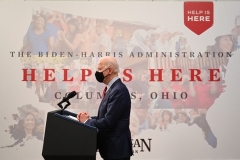 (CNSNews.com) - The President of the United States on Tuesday felt the need to ask someone off-camera if he should keep his mask on while speaking.

"I guess I'm supposed to keep this on, correct?"  the fully vaccinated Joe Biden said, touching his black face mask. "Yup," he acknowledged as someone indicated yes.

"So, uh, good afternoon -- almost getting into evening," Biden began. He devoted one paragraph to the mass shooting in Boulder, Colorado, which he'd previously addressed at the White House.

"Now let me turn to why I came today, to talk about, initially, the American Rescue Plan and the progress we are making on tackling COVID-19," Biden said, his delivery flat as he spoke the words scrolling past on a teleprompter.

"Look, I want everybody to be aware that there are three key parts of the American Rescue Plan," Biden said.

"First, we're going to more rapidly acquire, and we set out to more rapidly acquire enough vaccine to vaccinate every single American quicker than anticipated. And what my COVID team and went through -- and we used the Defense Production Act. We've been able to organize and help increase the number of doses in a much shorter time. So by the end of May, we're going to have on hand roughly 600 million doses, enough for every American."

In addition, there is a second important piece in that plan. It's focused on dealing with the economic deprivation so many Americans have become subject to, a consequence of this virus, through no fault of their own. Millions have lost their jobs, and they're still out of work.

Around 11 million children in America are going hungry, through no fault of their own. But as a result of the pandemic and the economic crisis, millions of Americans are not able to maintain their mortgage payments, their rental payments, and have found themselves on the verge of being evicted them having their homes repossessed.

Well, we stepped in and we prevented that from happening with the American Rescue Plan. Hundreds of thousands of businesses are now -- are not going to go under, but they're going to have an idea--an opportunity to reopen and have the financial assistance to be able to do it the right way and safely. Schools closed and children losing up to a year or more in learning capacity. You're ahead of the states here in Ohio, but across the nation, it's--the help was badly needed. And we've now provided the funding for that.

The second--ah, so second, the American Rescue Plan brings relief to a population that's badly hurting.

Here Biden talked about stimulus checks and the expanded child tax credit that will put money in pockets.

Biden then mentioned "a third way" the stimulus plan will help -- "and that's for your health--third type of health, and that's healthcare."

Here he talked about his "cancer moonshot," and he announced a new initiative at the Department of Health and Human Services "to deliver health breakthroughs, to find cures for cancer and other diseases by investing billions of dollars that companies are not willing to do--drug companies are not--don't have the capacity. And I know we can do this. I know we can find great breakthroughs."

At the end of his speech, Biden returned to a place of comfort for him -- his childhood.

He repeated the story we've all heard so many times:

I'll close with this. With the American Rescue Plan and the Affordable Care Act, millions of families will be able to sleep a little more soundly at night because they don't have to worry about losing everything if they get sick. I, like many of you, grow up in a middle-class--I guess technically lower-middle-class household based on income.

We lived in a three-bedroom split-level home with four kids and our grandpop living with us, and the paper--the walls were paper-thin. I remember hearing my dad rolling back and forth.

I could tell there was something wrong. I remember asking my mom the next morning, "What's the matter with Dad?" She said, "Honey, he's just worried. We just lost our health insurance. There's--no longer has this coverage."