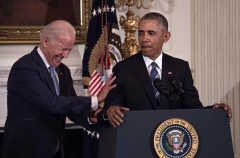 (CNSNews.com) - Appearing on "The Late Show" with Stephen Colbert Thursday night, former Vice President Joe Biden discussed the conversation he had with Barack Obama about choosing a running mate.

Biden refused to say who his running mate might be:

I honest to God don't know who, I promise you, right now. But you know, look, the only thing I know something about is the vice presidency. And when the president asked me to be vetted, to go through the process, I asked him why he wanted me to do that, and he said because he was confident I would never walk into the Oval Office and be intimidated -- I'd always tell him the truth, I'd always tell him what I thought, and I'd always be loyal in the sense that I would just talk to him, just let him know.

Because unless there is a fundamental, moral dilemma you have with what a president is proposing, your boss is proposing -- and I kiddingly told him if that was the case, I'd say I had prostate cancer and I'd resign, but I knew it wouldn't.

But one thing we had in common was that we were both, on the major issues, strategic issues, in complete alignment. Where we disagreed, when we disagreed, and we did sometimes, were on tactic, how to get things done.

When I asked him why me, he said there were two things: One, you were perceived to have and you actually had a lot of foreign policy experience -- and, by the way, he knew exactly what he wanted to do on his foreign policy. He had a strategic notion of America's role in the world. But he said, you know a lot of these leaders better than I do, you know the world, you know it better, and that's one of the reasons I want you.

And secondly, he said, you know how the Congress and the system works, and you've gotten a lot done, so those two are not -- that's not the experience I have had, I am new to it, that's why I want you to be your vice president.

Biden said he is modeling his own VP vetting process on Obama's, and he basically laid out a road map for the women who are eager to be chosen as his running mate:

"And so, for me, what I'm looking for, I'm looking for somebody who can complement and/or make up for -- Barack used to kid with his friends and say, Joe and I -- having Joe is like having an older brother, I know he'll always tell me what the hell he thinks, number one. And, number two, he'd say that we make up for each other's shortcomings. Well, he made up for a lot of my shortcomings, just a few --"

Colbert asked Biden about reports that Sen. Amy Klobuchar has been vetted by his team:

Biden said no one's been vetted yet.

"There's been a team put together to go down a preliminary list of people, ask their interest, ask them general questions, what are they interested in, why would they be interested or not interested in the job, et cetera. That process is coming to an end now, and the actual vetting of people -- that is, where you go into every detail of your background, you look at every vote they've ever taken, you look at everything from their financial statements to their health circumstances, it is a very invasive process.

"And that's why what you don't want to do is, you don't want to let all the names out you're vetting because if someone's not chosen, the presumption is not necessarily true that there must be something wrong."

Biden quoted one of Obama's close advisers as saying that Biden should choose the person whose final word he'd value the most: "Think to yourself -- you've got an important decision -- who's the last person you want to walk in the Oval Office to talk to you?"

Biden said that was his own request of Obama:

The reason why I wanted to do that was, even down in the Situation Room, even in these very, very, very tense and national security issues, I did not want to, if I knew he was going one direction and I disagreed with him, I did not want to disagree with him in front of even those 15 people in that room.

In response to the question, "Are you going to beat this guy?" Biden said "yes" four times in a row.

"I don't want to jinx myself, but I'll tell you why, the American people fully understand what's at stake here. This is the most important election in anybody's life, not because I'm running, but because of the circumstances.”  He went on to repeat his familiar criticisms of President Trump's response to the coronavirus pandemic.