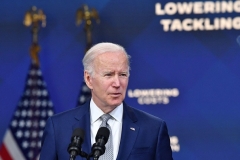 (CNSNews.com) - The Biden White House frequently issues "fact sheets" intended to show that President Biden is on top of issues of concern to American voters.

Today's fact sheet deals with "New Actions to Ease the Burden of Housing Costs." The key words are "density" and "zoning."

According to the fact sheet issued today:

"Today, President Biden is releasing a Housing Supply Action Plan to ease the burden of housing costs over time, by boosting the supply of quality housing in every community.

"His plan includes legislative and administrative actions that will help close America’s housing supply shortfall in 5 years, starting with the creation and preservation of hundreds of thousands of affordable housing units in the next three years.

"When aligned with other policies to reduce housing costs and ensure affordability, such as rental assistance and down-payment assistance, closing the gap will mean more affordable rents and more attainable homeownership for Americans in every community. This is the most comprehensive all of government effort to close the housing supply shortfall in history."

It's all about "density" and zoning, as the fact sheet makes clear.

Under the Plan, the administration says it will reward jurisdictions that have reformed their zoning and land-use policies with higher scores in the federal grant-making process.

"One of the most significant issues constraining housing supply and production is the lack of available and affordable land, which is in large part driven by state and local zoning and land use laws and regulations that limit housing density," the administration claims.

You can read the entire fact sheet here.

Also See:
Single-Family Zoning Is a Violation of the Fair Housing Act?