Biden Plans to Expand Pathways to Legal Migration; 'Unlawful Migration Is Not Acceptable' 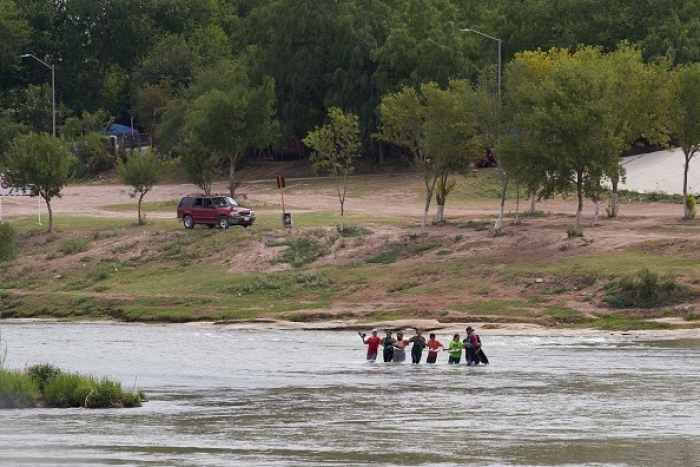 Migrants illegally cross the Rio Grande River in Eagle Pass, Texas, on May 22, 2022. (Photo by ALLISON DINNER/AFP via Getty Images)

(CNSNews.com) - "Safe and orderly migration is good for all of our economies, including the United States," President Joe Biden said on Wednesday in remarks at the opening ceremony of the Summit of the Americas in Los Angeles.

"But unlawful migration is not acceptable," said Biden, who has allowed record illegal flows across the U.S.-Mexico border. "And we will enforce our borders, including through innovative, coordinated action with our regional partners."

Today at the summit, Biden plans to launch the so-called "Los Angeles Declaration," which he described as a "ground-breaking, integrated new approach to managing migration and sharing responsibility across the hemisphere."

On Thursday, a "senior administration official," speaking on background, briefed reporters on the Los Angeles Declaration:

"Tomorrow (Friday), President Biden, alongside fellow heads of state, will announce a regional partnership to address historic migration flows affecting every country in the region.," the official said:

"The Western Hemisphere, as a region, is undergoing historic and unprecedented rates of irregular migration...President Biden is asking all governments along the migratory route to establish and fortify asylum processing in each of their respective countries while more effectively enforcing their borders, conducting screenings, and removing those individuals who do not qualify for asylum.”

Under the declaration, governments will:

-- expand temporary worker programs to address labor shortages, including in the United States; (make it easier for U.S. employers to bring in workers);

-- surge financial support (through the Inter-American Development Bank, World Bank, and other donors) for countries that are hosting large refugee and migrant populations.

-- combat and root out human smuggling networks that prey on the most vulnerable in the region.

-- provide migration opportunities for the people of Haiti, in light of the deteriorating security and humanitarian situation in the country. (The official said the "goal here is to provide legal channels so that folks don’t have to take irregular means to get to safety or to reunite with family.")

According to the official, Biden's announcement is "a major step…towards solving the unprecedented irregular migration challenge in the region and along our border while also focusing resources to modernize immigration and temporary worker programs to address labor shortages that are driving up prices."

A reporter asked how the declaration is going to "meaningfully change the situation for the United States, which, as we know, is taking in the vast majority of migrants in the Western Hemisphere?"

"We would absolutely love to see Congress act on this," the official said. "I think we see that there’s a real opportunity to expand legal channels for migration, and that — that would be good for our economy, good for the United States, but it would also directly have an impact on reducing irregular migration. We will do everything we can within our executive authority."

The official said not every country in the Western Hemisphere is expected to sign the declaration:

"We don’t expect every country to sign.  As we were developing the declaration and engaging with countries in the hemisphere, we were prioritizing countries that are most impacted by migration and refugee flows...And there are some countries that have been particularly impacted by the Venezuelan outflows, the Nicaraguan outflows.  A country, you know, like Costa Rica and Panama, you know, 9, 10 percent of their population are made up of immigrants and refugees.

“So, you know, there’s certain countries that, I think, feel the pain and recognize the value in coming together, working on responsibility sharing, and advancing — exploring new tools that we can employ to better bring the situation under control.