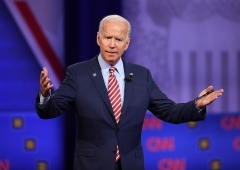 Former Vice President Joe Biden before he went into seclusion at his Delaware home. (Photo by Robyn Beck/AFP via Getty Images)

He repeatedly denied accusations by a former staffer, Tara Reade, who says Biden sexually molested her in a Senate building in 1993. He also repeatedly said he doesn’t “remember” any complaint being filed.

"I am absolutely positive that no one I am aware of ever has been made aware of any complaint, a formal complaint made ... by Tara Reade against me at the time this happened 27 years ago or until I announced for pres-- well, I guess it was in April or May this year. I know of no one who is aware that any complaint that was made."

"I am absolutely positive that no one I am aware of, was ever made aware of a complaint, formal complaint made of or by Tara Reade against me at the time this happened 27 years ago or until I announced -- I guess it was in April or May this year. I know of no one who is aware of any complaint that was made."

Biden said he has not reached out to Reade. "When she first made the claim (she went public in March) we made it clear that it never happened. And that's as simple as that."

Biden said the only record of a complaint such as Reade's would be in the National Archives. In a statement released before his TV interview, Biden wrote: “I am requesting that the Secretary of the Senate ask the Archives to identify any record of the complaint she alleges she filed. If there was any such complaint, the record will be there," Biden wrote.

Brzezinski asked Biden if he’s preparing us for a complaint that might be revealed in some way?

"I'm confident there is nothing,” Biden responded.  No one ever brought it to the attention of me 27 years ago – this is any assertion at all. No one that I'm aware of in my campaign -- excuse me, in my Senate office at the time, is aware of any such…complaint. And so I’m not worried about it at all.

During the Kavanaugh hearings, Brzezinski noted, Biden said that women should be believed:

"Look, from the very beginning, I’ve said believing women means taking women's claims seriously when she steps forward. And then vet it. Look into it. That's true in this case as well. Women have a right to be heard," Biden said.

And while Biden has urged the Archives to release any complaint of Reade's, his Senate documents donated to the University of Delaware have been resealed. "Why not reveal your Senate documents held in Delaware?" Brzezinski asked him: "Why was the access to those documents sealed up when they were supposed to be revealed?"

"Well, they weren't supposed to be revealed," Biden said. "I gave them to the university. The university said it’s going take them time to go through all the boxes. They said it wouldn't be before 2020 that that occurred, or 2021, I can’t remember the year they said. But look, a report like this can only be one place. It would not be at the University of Delaware.

“My archives do not contain personal files…personnel files. They are public records. My speeches, my papers, my position papers. And if that document existed, it would be stored in the National Archives where documents from the office she claims to have filed her complaint with are stored. That’s where they are stored. The Senate controls those archives.

“So I'm asking the Secretary of the Senate today to identify whether any such document exists. If it does, make it public."

Interestingly, Biden brought up tax records: "If you worked with  me or I worked for  you and you had my income tax returns, you had my whatever, they’re private documents. They don't get put out in the public. They are not part of the public record that in fact, that any senator or vice president or president has in their documents.

(As the New York Post reported on Friday: "The Atlantic and The Washington Post argued that Biden should instruct the university to turn over the records, saying they “could contain confirmation of any complaint Ms. Reade made, either through official congressional channels or to the three other employees she claims she informed not specifically of the alleged assault but more generally of harassment.”)

Biden said he doesn't know why Reade is alleging that Biden sexually molested her in a Senate hallway in 1993. She was later fired from her job in Biden's office.

"But I have a right to say, look at the facts, check it out. Find out whether any of what she says is asserted or true. And based on the investigations that have taken place so far...by two major papers -- they interviewed dozens of my staff members, not just senior staff, but staff members, I’m told – at least, that's what they said.

And nobody, this was not the atmosphere in my office at all. No one has ever said anything like this."