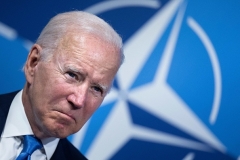 (CNSNews.com) - The Biden administration insists that the porous southwest border is "closed." His spokeswoman Karine Jean-Pierre said it on Tuesday: "But the fact of the matter is, the border is closed..." she told reporters accompanying the president to the NATO summit in Madrid.

However, in a statement on the recent heatstroke deaths of 51 foreigners smuggled into the United States, the President did not use the term illegal alien, now frowned upon by immigration advocates. He did not even say "undocumented migrants."

Instead, Biden referred to the hundreds of thousands of illegal border-crossers as "people who are seeking to enter the United States between ports of entry," a crisis situation that he has ignored.

The statement also bashed Republicans who have sounded alarms about the border situation for months: "Exploiting vulnerable individuals for profit is shameful, as is political grandstanding around tragedy," the statement said, describing criticism of Biden's relaxed border policies as "grandstanding."

Here is his statement, which someone in the White House wrote for him:

"The tragic loss of life in San Antonio, Texas that took place yesterday is horrifying and heartbreaking.  Our prayers are with those who lost their lives, their loved ones, as well as those still fighting for their lives. As always, I am grateful for the swift work of all of the Federal, state, and local first responders.

"While we are still learning all the facts about what happened and the Department of Homeland Security has the lead for the investigation, initial reports are that this tragedy was caused by smugglers or human traffickers who have no regard for the lives they endanger and exploit to make a profit.

"This incident underscores the need to go after the multi-billion-dollar criminal smuggling industry preying on migrants and leading to far too many innocent deaths. In Los Angeles two weeks ago, I announced that the United States has launched a first-of-its kind anti-smuggling campaign with our regional partners. In the first three months, we have made over 2,400 arrests, and that work will only intensify in the months ahead.

"Exploiting vulnerable individuals for profit is shameful, as is political grandstanding around tragedy, and my Administration will continue to do everything possible to stop human smugglers and traffickers from taking advantage of people who are seeking to enter the United States between ports of entry."

"We’re focused on continuing our historic actions to disrupt dangerous smuggling networks, including through a new anti-smuggling campaign that just in the first two months resulted in over 1,800 arrests.  But the fact of the matter is, the border is closed, which is in part why you see people trying to make this dangerous journey using smuggling networks.

"Again, our hearts go out to the families at this time.  We are going to stay focused on the facts and making sure that we hold these smugglers accountable. That’s going to be our focus."

Meanwhile, record numbers of foreigners are coming into this country: According to U.S. Customs and Border Patrol Statistics, 1,526,899 illegal aliens have been encountered at the southwest border so far in Fiscal Year 2022, and that doesn't include the number of "got-aways."

The chart below shows how illegal immigration increased after Joe Biden took office in January 2021. 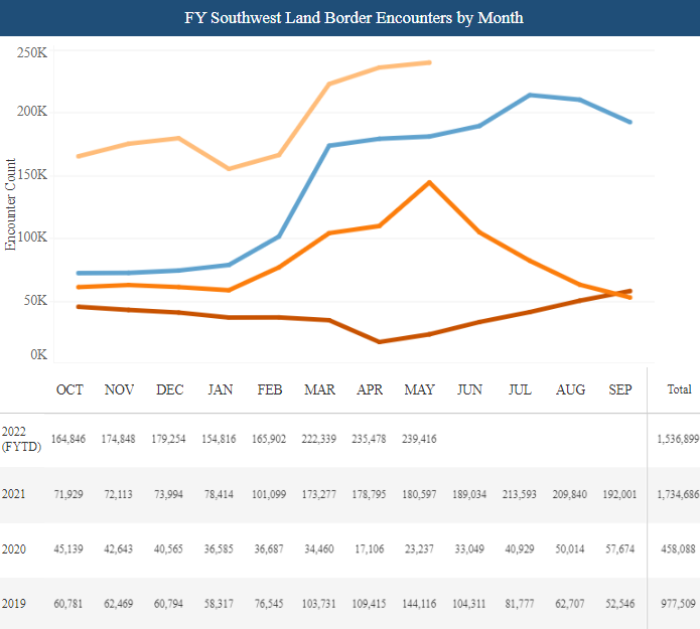